CUPERTINO, California–October 16, 2007–Apple today announced that Mac OS
X Leopard will go on sale Friday, October 26 at 6:00 p.m. at Apple’s retail
stores and Apple Authorized Resellers, and that Apple’s online store is now
accepting pre-orders. Leopard is packed with more than 300 new features and
introduces a brand new desktop with Stacks, a new way to easily access
files from the Dock; a redesigned Finder that lets users quickly browse and
share files between multiple Macs; Quick Look, a new way to instantly see
files without opening an application; Spaces, an intuitive new feature used
to create groups of applications and instantly switch between them; and
Time Machine, an effortless way to automatically back up everything on a
Mac.

“Leopard, the sixth major release of Mac OS X, is the best upgrade we’ve
ever released,” said Steve Jobs, Apple’s CEO. “And everyone gets the
‘Ultimate’ version, packed with all the new innovative features, for just
$129.”

Leopard’s new desktop includes the redesigned 3D Dock with Stacks, a new
way to organize files for quick and easy access with just one click.
Leopard automatically places web, email and other downloads in a Downloads
stack to maintain a clutter-free desktop, and users can instantly fan the
contents of this and other Stacks into an elegant arc right from the Dock.
Users can also create their own Stacks for quick access to folders,
documents or applications. Leopard’s gorgeous new look extends to all
applications, with every window on the desktop offering a consistent design
theme and active windows outlined by deeper shadows that make them stand
out.

The updated Finder includes Cover Flow and a new sidebar with a
dramatically simplified way to search for, browse and copy content from any
PC or Mac on a local network. Content on any computer on a local network
can now be searched using Spotlight, browsed using Cover Flow or copied
across the network with a simple drag and drop. .Mac members can use the
new Back to My Mac feature to browse and access files on their remote Macs
over the Internet.

Quick Look is the fastest and easiest way for users to look inside files
without launching them or even having the application that created them.
With Quick Look, users can instantly view full-screen, high-resolution
files of virtually anything, even media files, from any view in the Finder.

Spaces gives users a powerful new way to organize their work by creating
customized desktops which can contain only those applications or documents
needed for each project, with the ability to quickly switch between Spaces
with the mouse or keyboard.

Time Machine lets users easily back up all of the data on their Mac, find
lost files and even restore all of the software on their Mac. With just a
one-click setup, Time Machine automatically keeps an up-to-date copy of
everything on the Mac.* In the event a file is lost, users can search back
through time to find deleted files, applications, photos and other digital
media and then instantly restore the file. If it’s ever necessary, Leopard
can also easily restore an entire system from the Time Machine data on an
external drive.

Mail has been updated in Leopard and features more than 30 stationery
designs and layouts that look great on a Windows PC or Mac so users can
easily send stylish, personalized emails with beautiful graphics and
photos. Notes and To Dos help users stay organized by acting just like
emails that can be easily created, saved as drafts, synced across multiple
Macs and stored in Smart Mailboxes. Data detectors automatically sense
phone numbers, addresses and events so they can be added to Address Book or
iCal with just a few clicks, and users can keep up-to-date by getting the
latest news and blog feeds delivered directly to their mailboxes with a
built-in RSS reader.

iChat, the easiest-to-use video conferencing application on any personal
computer, offers even richer video chats in Leopard with iChat Theater,
which makes it easy to show photos, presentations, videos or files in a
video conference; screen sharing which lets users remotely view and operate
another Mac; and Photo Booth effects for fun distortions and video
backdrops that can instantly make users appear to be anywhere they choose.

Other new features in Leopard include:

* improved Parental Controls, aiding parents in managing their kids’ online
activities with automatic identification of unsuitable content before
allowing website access, plus time limits and activity logs that can be
accessed from any Mac on a home network;

* the complete Boot Camp release, previously available only as a beta,
making it possible to run Windows natively on Intel-based Macs;**

* Web Clip, bringing anything that a user wants from a web page to
Dashboard as a live widget;

* an enhanced Dictionary with Wikipedia built in, allowing users to access
up to date information on virtually any subject in a snap;

* a newly updated iCal with multi-user calendaring based on the new CalDAV
standard; and

* an updated version of Front Row, making it even easier to play music or
watch movies, TV shows and photos on a Mac using the ultra-simple Apple
Remote.

Mac OS X version 10.5 Leopard will be available on October 26 at Apple’s
retail stores and through Apple Authorized Resellers for a suggested retail
price of $129 (US) for a single user license, and online pre-orders can be
made through Apple’s online store (www.apple.com) starting today. The Mac
OS X Leopard Family Pack is a single-household, five-user license that will
be available for a suggested retail price of $199 (US). Volume and
maintenance pricing is available from Apple. The standard Mac OS Up-To-Date
upgrade package is available to all customers who purchased a qualifying
new Mac system from Apple or an Apple Authorized Reseller on or after
October 1, 2007 for a shipping and handling fee of $9.95 (US). Leopard
requires a minimum of 512MB of RAM and is designed to run on any Macintosh
computer with an Intel, PowerPC G5 or G4 (867 Mhz or faster) processor.
Full system requirements can be found at www.apple.com/macosx/techspecs. 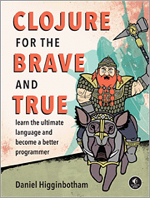 Recommended reading: ‘Clojure for the Brave and True’