Perth, Western Australia – 19 Aug 2001 – It was announced today on
interarchy.com that Interarchy 5.0 with FTP Disk (the new version of
Anarchie) has been completed and is ready for download.

Interarchy is award-winning Internet file transfer software for the
Macintosh. It enables a Macintosh user to access files on other computers
over the Internet. Interarchy uses the standard Internet protocols FTP and
HTTP, so Interarchy can access files on virtually any type of computer or
device.

Version 5.0 introduces a major new feature called FTP Disk. This feature
allows you to access files on frequently-used servers with any application
in exactly the same way you access files on your hard drive. Furthermore,
an FTP Disk gives you instant access to files even over a slow connection
or while offline. It requires no proprietary software on the remote
computer, as it works via the standard FTP protocol. The FTP Disk feature
makes the process of accessing an FTP server automatic, transparent and
easy.

Interarchy was formerly known as Anarchie. The name change came during the
transition from version 3.7 to version 3.8, and was the result of a failed
legal dispute with a party that had registered the domain name anarchie.com.

Interarchy is the most popular software of its class. Interarchy has won
numerous awards throughout its 10 year history including two nominations
for the 1999 and 2000 MacWorld Editors Choice Award. Interarchy has an
estimated 650,000 users and the Interarchy User Group has a highly active
population of over 1000. Interarchy was given rave TV reviews as early as
1994 on the McNeil/Leher show.

Interarchy 5.0 with FTP Disk is engineered by Stairways Software Pty Ltd
and distributed by Kagi. Interarchy 5 is currently available for free
evaluation and licensed on a per workstation basis.

New customers can purchase Interarchy from http://purchase.interarchy.com.
For licenses larger than 500 seats lodge a sales enquiry at
http://www.interarchy.com/email.

A fully-functional unlicensed version of Interarchy will be available until
the 1st of October 2001. It can be downloaded from either
http://the.ausmac.net/ftp/Communication-SW/interarchy-50.hqx or
ftp://auto.interarchy.com/interarchy-50.smi.hqx.

The major changes between version 4 and version 5 were:

* FATCarbon. Interarchy is a single application that will run natively on
Mac OS X, Mac OS 9 and Mac OS 8.

* Mirror Both Ways. Make a local folder look exactly the same as a remote
folder by transferring only things that are different between the two
folders.

* Mirror Download. Make a local folder look exactly the same as a remote
folder by downloading changes from the remote folder over the top of the
local folder.

* Mirror Upload. Make a remote folder look exactly the same as a local
folder by uploading changes from the local folder over the top of the
remote folder.

* Manual Upload. An input dialog that allows a connectionless manual
uploading of a file or folder to a remote server without first calling up a
remote listing. This operation can be bookmarked.

* Tunnel via SSH. All FTP username and passwords can now be securely
encrypted for security via SSH. This feature works for FTP Disks, This
feature is only available under Mac OS X.

* Drag Browser Links. You can now drag and drop links from your web browser
to Interarchy, rather than having to copy and paste them.

* Transparent Interfaces. Custom Interarchy interface windows (aka wands)
now support multiple levels of transparency by using the alpha channel of
the PICT resources that make up their four frames. This feature is only
available under Mac OS X. More info at .

* Hierarchical main menu. To reduce the clutter and complexity of the main
menu (the File menu under Mac OS 8 and Mac OS 9, the Interarchy menu under
Mac OS X) it has been factored into command sub-menus called FTP, Web and
Net.

* Manual FTP. The traditional Anarchie-style FTP listings and dialogs were
renamed to “Manual FTP” to give them context from the new automatic FTP
Disk feature and the mirroring features.

Some developers notes from the version 5 beta testing cycle follow

Interarchy will build a default Interarchy preferences folder upon first
installation. The default startup item is the FTP Disk Manager window, but
this is completely configurable as is the contents of the Home menu and
Bookmarks listing. This is accomplished by modifying the Interarchy
preferences folder. You can navigate to this folder by selecting the
“Preferences Folder” item in Interarchy’s Settings menu. Interarchy is
modular, allowing you to hide features that you do not use, and make the
ones you do easily accessible.

Customers that purchased Interarchy 4 before 25 June 2001 will be able to
upgrade to Interarchy 5 for a discounted amount. For instructions on
claiming your discount upgrade to 5 look up your Interarchy 4 purchase at
http://enquiry.interarchy.com.

The developers of Interarchy produce a casual monthly newsletter reporting
on the status of the project and other matters of interest to Macintosh
Internet users. It is called Total Interarchy and is distributed via email
and the web at http://total.interarchy.com.

The Interarchy User Group is an online community consisting of the
developers and users of Interarchy. It is located on the web at
http://user.interarchy.com.

Extensive online documentation of Interarchy edited by Chris Pepper can be
found at http://documentation.interarchy.com.

For sales enquires, customer service, technical support, complaints or to
contact a specific member of our team we prefer to be contacted via email.
Our current email addresses are listed at http://www.interarchy.com/email 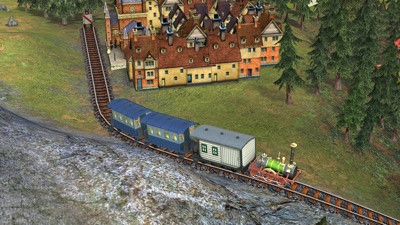 Sid Meier’s Railroads! steams onto the Mac this fall