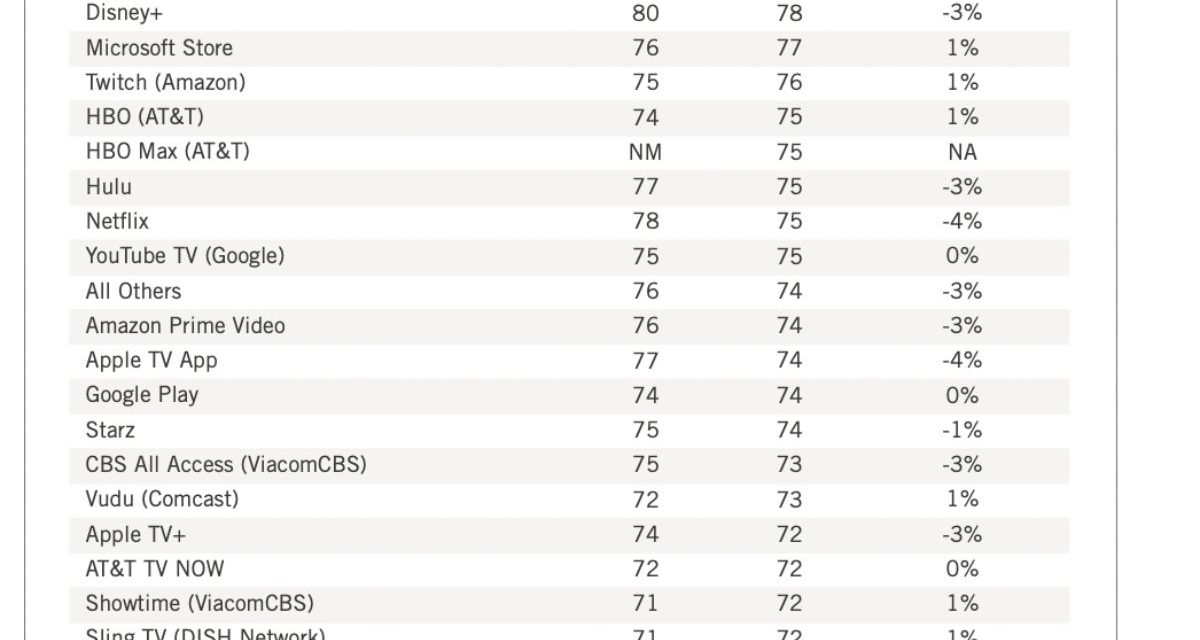 After a steady mark last year, customer satisfaction with video streaming tumbles 2.6% to a score of 74 (on a scale of 0 to 100), according to the study. While consumers still prefer streaming above all other telecom industries, its stranglehold on the segment is slipping as its lead over the next closest industry shrinks to just three points.

“With folks resigned to stay at home for the better part of a year and a half, the heavy strain on telecommunications was inevitable,” says David VanAmburg, managing director at the ACSI. “The large consumption of bandwidth for internet services and countless hours spent streaming videos and movies were sure to impact satisfaction. And it turns out that streaming has taken the biggest hit of all.”

Video streaming remains the customer satisfaction leader among telecom industries despite its current decline. However, its advantage over subscription TV shrinks from 12 to 9 points.

Following a strong debut last year, Disney+ comes back down to earth. It still outpaces its competitors in video streaming – and across all five telecom categories – but customer satisfaction diminishes 3% to an ACSI score of 78.

Microsoft Store moves into second place after climbing 1% to 77, followed by Amazon’s Twitch, up 1% to 76.

Netflix’s fall from grace continues for a second year. The once-upon-a-time frontrunner plummets 4% to a score of 75, tying it with four others: Hulu (down 3%), HBO (up 1%), newcomer HBO Max, and YouTube TV (unchanged).

The group of smaller streaming services loses half of last year’s gain, dropping 3% to the industry average of 74. Four other companies also meet the average: Amazon Prime Video (down 3%), Apple TV% (down 4%), Google Play (unchanged), and Starz (down 1%).

Crackle sits at the bottom of the industry once again, unmoved at an ACSI score of 68.

About the ACSI Telecommunications Study

The ACSI Telecommunications Study 2020-2021 is based on interviews with 37,907 customers, chosen at random and contacted via email between April 1, 2020, and March 29, 2021. Customers wereasked to evaluate their recent experiences with the largest companies in terms of market share, plus an aggregate category consisting of “all other”—and thus smaller—companies in those industries.