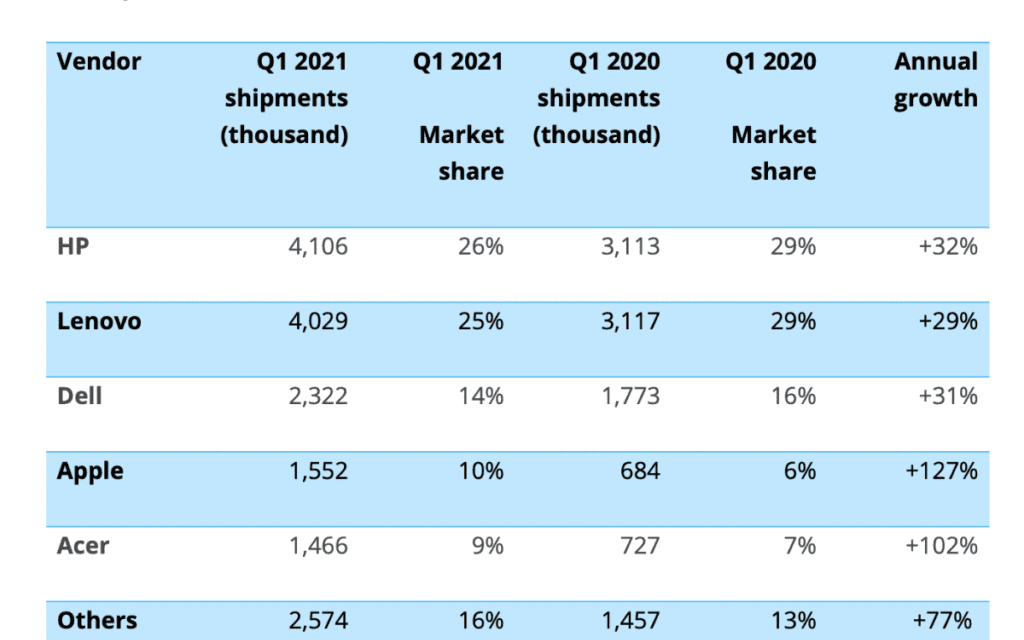 In the first quarter of 2021, Western European personal computer (PC) shipments (desktops, notebooks and workstations) shipments reached 16.1 million units. That’s up 48% year-on-year. And Apple saw the highest Western European growth of the top five (HP, Lenova, Dell, Apple, and Acer). Mac sales were, up 127% year-on-year, according to Canalys. The research group says the company’s new M1-processor powered devices, have been the driving force behind its commercial success.

“Apple’s success makes sense, as Western Europe has a base of existing Mac users, high disposable income, and a strong community of tech enthusiasts and early adopters,” Canalys Research Analyst Trang Pham says. “Apple’s recent move to design its own processors shows its ambition. It also reflects Intel’s lagging SoC process with 5nm and 3nm chips. By working with TSMC directly, Apple has been able to bring 5nm to Mac much sooner.”

However, he adds that the move is about more than specifications. “It shows absolute commitment to Apple’s ethos, that hardware, software and services work best when created together,” Pham says. “That said, enterprise IT managers may look at M1-based Macs as a complex addition to their estate, and Apple must now ensure clear communication about the ease of device management and optimization of bespoke apps.”

Regarding other vendors, in the first quarter of 2021, HP regained the top PC vendor spot in Western Europe. The company shipped 4.1 million units and taking a 26% share of the market. Lenovo followed closely, shipping 4.0 million units to take a 25% share. Dell, Apple and Acer completed the top five, with 14%, 10% and 9% shares, respectively.