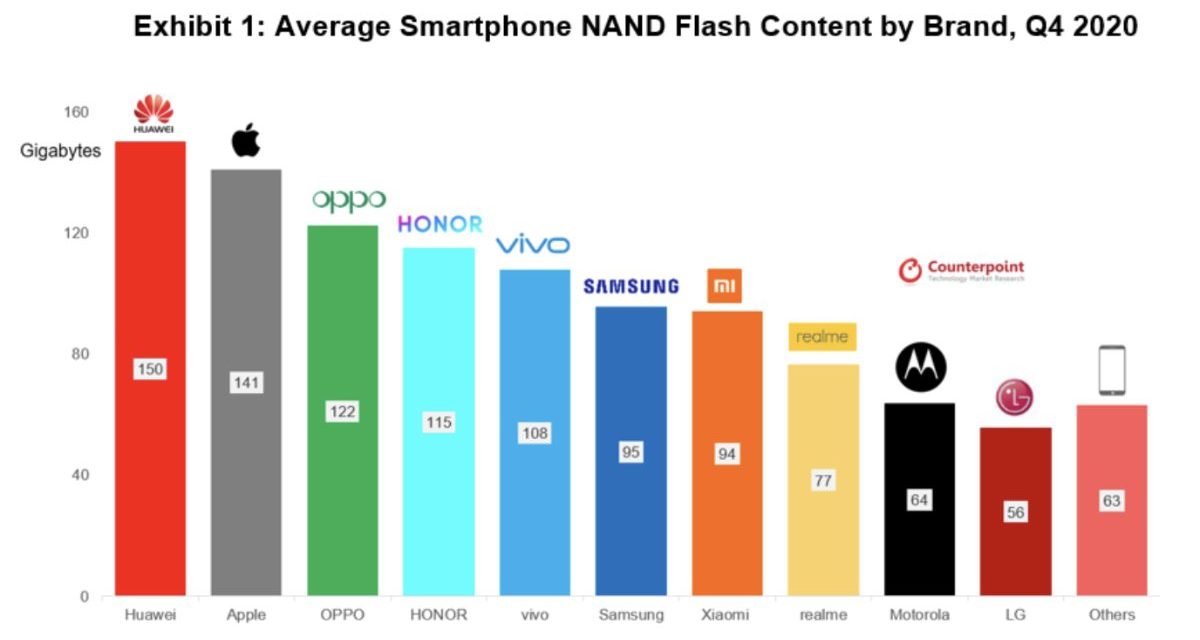 Storage capacity is quickly gaining traction as one of the more important criteria for which smartphone manufacturers compete among themselves, especially in the premium Android segment, according to Counterpoint Research. The report hints that a 1TB version of the iPhone — which is rumored to be in the works for the iPhone 13 — will help Apple’’s smartphone sales.

The global smartphone industry is experiencing an increasing trend of adoption of larger NAND capacities. In 2020, smartphones crossed the 100GB mark for average NAND capacity. The high-end smartphones benefitted from the high-capacity and high-speed UFS NAND, whose prices reduced significantly in the past two years, according to Counterpoint Research’s Component Price Tracker.

The research group says that China-based Huawei’s average NAND density was much higher than any other Android manufacturer in 2020, reflecting its focus on the high-end smartphone segment in the past few years to improve margins. In the 2019-2020 period, nearly half of Huawei’s and Apple’s smartphone shipments came from their 128GB and 64GB variants, respectively.

In the same period, Huawei’s and Apple’s 128GB variants experienced a yearly growth in low-to-mid teens for shipments. In comparison, their 64GB variants saw nearly a double-digit and over 1% decline, respectively.

Counterpoint Research says that, with their higher price point, iPhones have historically retained a much higher average NAND-flash density compared to their Android peers. However, this gap is quickly reducing due to (a) Apple’s decision to limit the iPhone 12 storage to 512GB and (b) rapidly rising storage capacities in Android smartphones as per our historical data and forecast of smartphone memory for the 2018-2024 period.