The Northern Spy: steealing the show 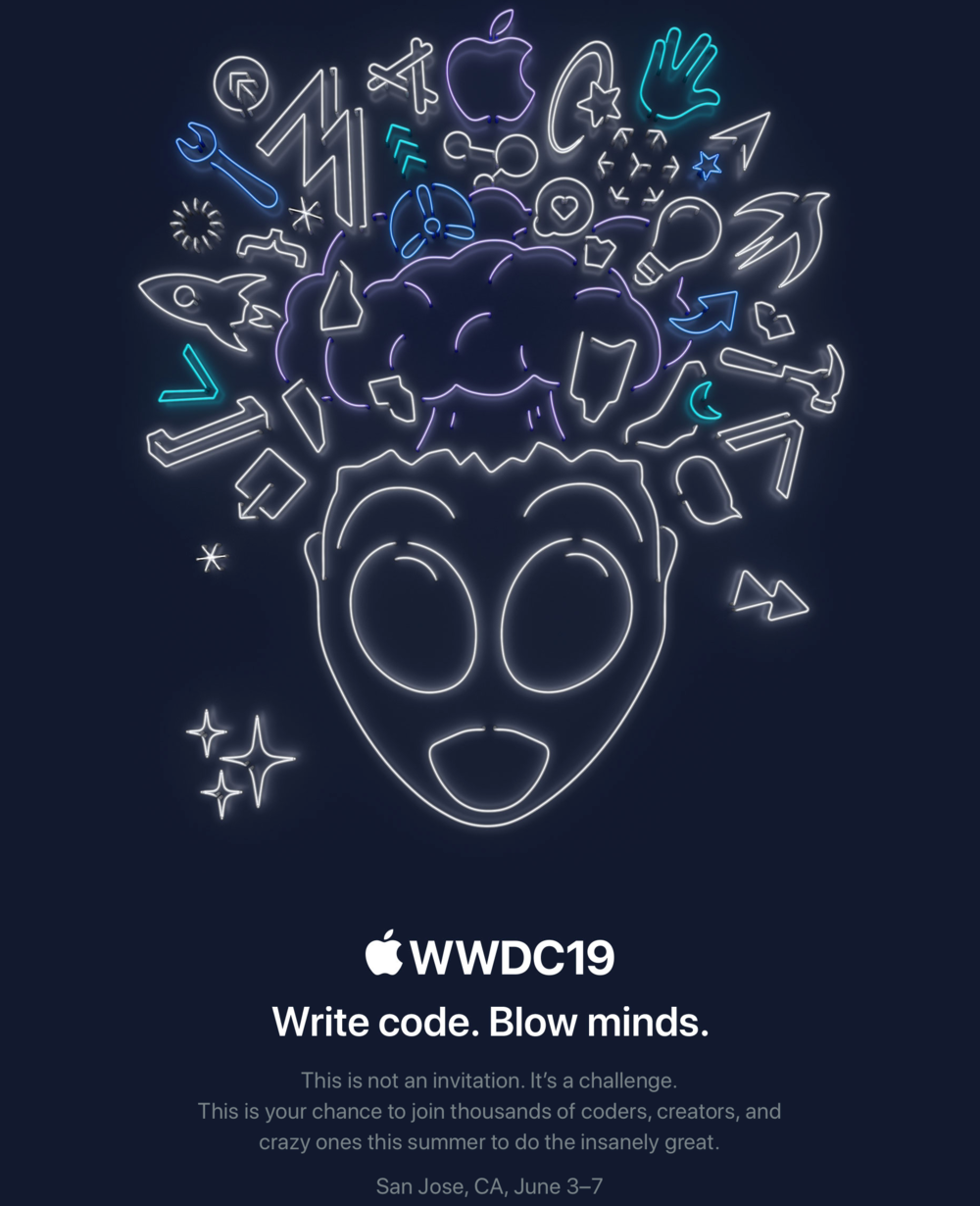 This column is a little late because the Spy placed it on hold until after the June 3 announcements at the annual keynote WWDC speech.

Items put on the table by iCook include those of modest importance to the Spy, but of more note to some people, including:

° The expected (and leaked) replacement of iTunes in macOS by Apple Music, AppleTV and Apple Podcasts. This will certainly make it easier to find things. The three functions have been joined in a confusing-to-navigate pastiche that the Spy has never liked.

° A Dark Mode for iOS 13, making it more consistent with Mojave, rather than the other way around for a change. This one’s a tossup. The Spy has been using dark mode on the latter, but isn’t sure it’s better. Perhaps at night… Also, this comes with minor changes to Mail, Notes, Messages, and Reminders, plus iPod sharing (another catch-up to competitors).

° Apple Maps will gain features the Google Maps has had all along, including (in the U.S. of A. only and only by year’s end) sufficient detail for street views (“look around” in Applespeak).

° Apple touts its commitment to privacy and is introducing a single sign on service to outside apps similar to several competitors’ products. This is something the Spy would not use, over concerns that a single breech would expose access to many sites.  This one uses FaceID, but that seems to the Spy hard to secure. Pass. At the same time Apple is introducing more security options to tracking by third party apps. Good, but the Spy doubts this goes far enough, as app tracking is riddled with flaws and holes.

° Another catch-up, this time to Amazon and Google involves enhancements to the voice controls of HomePod. This one is a real yawn. Nice toys, but who wants or needs a device that’s always listening to you?

° And, another yawn is the updates to Apple Watch to make it somewhat independent of the phone. A smart watch is the last thing the Spy wants or needs. Pass again.

° Finally, there will be minor upgrades to AppleTV, and the tablet OS will now be called iPadOS, and have new features of its own, such as  the ability to act as a secondary Mac display (interesting, but of limited use). To some, the above announcement were the show, but to the Spy…

Much more important was the long promised and now announced (again) shiny new MacPro tower for promised delivery sometime in the fall. More details include a return to a multiply pierced metal box on wheels (optional kit) with two handles on top, and inside an 8, 12, 16, 24, or 28 core INTEL chip. The first three support up to 1T of memory, the latter two support a maximum of 2T.

The Spy referred to the original tower as bathroom-metal style after that used in the WWDC convention centre that year. Others dubbed it “cheese grater”, and the same will surely be applied to this third (retro) iteration of the Intel based Pro, though the holes appear larger. Starting price is an incredible $5999, and one can no doubt assume this is for the lowest possible of all optional configurations herein described.

The old tower Mac had a latched side door. The new opens with a lift and twist of a top handle, whence the case pulls up and off, exposing the many slots for adding upgrades.

Monitor cards are either one AMD Radeon Pro 580X or up to two AMD Radeon Vega IIs. (Note that the latter have 32M of memory, 64 compute units and 4096 stream processors, two display port connections routed to the system to support Thunderbolt 3 ports, four more Thunderbolt and an HDMI port on card–each.) Both type of card support up to six 4K, two 5K or one 6K monitor–each.

The new Pro is a slot machine. There are eight PCI Express slots. Four are paired as two MPX bays (for the high end graphics cards), with bay one having an x16 gen 3 slot for graphics and an x8 gen 3 slot for I/O, and the second bay two of the former. (The 580X card needs only one slot in the bay, each Vega occupies the space of both.) Each of these bays has a 300W auxiliary power connector.

There are more two x8 slots and one more x16 slot and, (all full length) with another 75W auxiliary power connector, plus a half-length x4 slot occupied by an Apple I/O card that offers six ports–two each of USB3, TB3, and 10G Ethernet. There are two more TB3 ports on the top of the enclosure. The Spy would have preferred these closer to the back, but top is more convenient than front.

Note that with two MPX units installed (4 GPUs) the processing power tops out at an astonishing 56.8 teraflops on single precision, 112.8 on half precision.

Internally mounted storage is provided by two SSD slots, for which Apple offers modules in 256G, 512G, 1T, or 2T (each). There are no internal platter disk bays. This storage is encrypted by an Apple T2 Security Chip. The specs do not indicate whether this can be turned off (portability don’t’ya know), or whether it is or can be applied to external devices.

There is a built in speaker and a 3.5mm headphone jack, and the package as shipped includes an extended keyboard and mouse with trackpad optional. Also built in of course are bluetooth and 802.11ac Wi-Fi networking.

Obviously, the potential power consumption of this monster machine requires a large heat sink. Let’s hope Apple has learned a lot of lessons on this score from the original Power PC towers, where the crippling heat problems were never solved either by IBM (manufacturer) or Apple.

Apple will again sell a high end TB3 monitor, this time a 32-inch LCD 6K 228 ppi beast called the Pro Display XDR. Starting price is $4999 for standard glass, $5999 for nano-texture glass! The monitor sports three downstream USB-C ports. The optional Apple stand for this thing allows tilt and rotation but costs an additional $999. Alternately, Apple can supply a VESA mount adapter for $199. The connector is magnetic, so changes are quick. However, the Spy expects both stands and VESA adapters will be available from third parties for much less, and that few people but high end video professionals will buy this monitor.

MacOS 15 will be nicknamed Catalina, and introduces the usual small number of “features” the Spy is unlikely to use, as his focus is productivity.

The new tower, monitor and macOS 15 will all be available this fall. Will the Spy bite? Yes for the OS–at least after the market beta tests it, say beyond 15.2 or so around Christmas break time. He will need time to find alternatives for some of his 32-bit programs, such as Excel 2011 (2016 has too many bugs and missing features for his liking.) No for the new tower. Far too expensive. Knock $2000 off the price and it might be realistic. Never for the 6K monitor. He has no conceivable need. But there will be some people who will pony up $13K ++ for the whole system and think little of the expense.

The bottom line: After years of neglecting the high end market and seeing competitors edge Cupertino partway out of this market, and after the “trash can” pro was so poorly received, Apple has apparently delivered on its promise to produce a pro machine that tops anything yet produced for the retail market. OTOH Cupertino may have aimed too high by targeting a very small boutique market. We’ll see. If you want the very best and it’s only money…

The steel shed project (see last month’s column) is dead dead, killed by excessive municipal demands for engineering (four sets of same) on a garden storage building. As our faithful reader will recall, the most vexing of those included a requirement to engage a structural engineer to approve the design of a non-structural wall. Go figure.

Negotiations with the supplier have now produced a settlement that includes a partial refund of the Spy’s deposit (coming real soon now) and agreement not to “disparage” the company. All right, the Spy will not even name the vendor after all, nor award it brickbats. But he offers no bouquets either, and can only shake his head in disbelief at City Hall.

He will however offer advice. Never buy a structure from outside the building code jurisdiction in which you propose to erect same–it can bring nothing but grief. IF different Province or State THEN run, do not steal away from even the most wonderful sounding pricing inducement. Nothing but more grief.

The fundamental problems were two-fold: (1) the fact that the supplier was ignorant of current British Columbia building codes and stamped the plans for a previous iteration, and (2) excessive and obsessive demands by the city for unnecessary engineering approvals for a lawn mower shed. What a waste! The engineering would cost more than the building.

Oh, and following up on the other low tech, issue from last month, the Spy did successfully source not merely the necessary left-hand threaded replacement nut (part number 325.173–the old one rusted) that connects the gas valve to the outflow port on the gas tank of the AL 330B Acme engine on his 45-year old BCS rototiller, but was able to purchase from Earth Tools the whole valve and filter assembly and new gas line to connect it all up. Project successful and the repaired old machine works like a charm. Large bouquets to a supplier that really knows how to treat customers well, even when they need to repair machines over four  decades old. Would that high tech and others (sic) knew and did the same. How much high tech (other than Macs) lasts even five years? This is going to beat five decades.

Opinions expressed here are entirely the author’s own, and no endorsement is implied by any community or organization to which he may be attached. Rick Sutcliffe, (a. k. a. The Northern Spy) is professor of Computing Science and Mathematics, Interim Dean of Science and Chair of the University Senate at Canada’s Trinity Western University. He has been involved as a member of or consultant with the boards of several organizations, and participated in developing industry standards at the national and international level.

Mobile location-based advertising will be worth € 10.7 billion in 2018