Gartner: 28% of spending in key IT segments will shift to the cloud by 2022 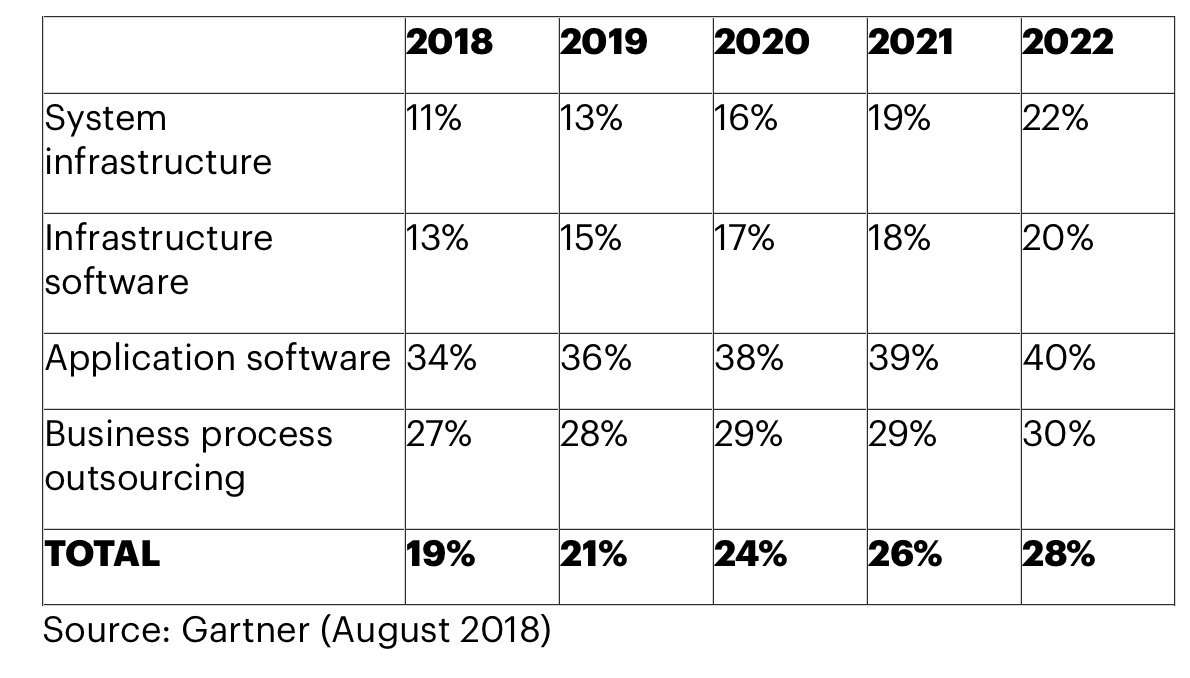 Twenty-eight percent of spending within key enterprise IT markets will shift to the cloud by 2022, up from 19% in 2018, according to Gartner, Inc. (www.gartner.com).

“The shift of enterprise IT spending to new, cloud-based alternatives is relentless, although it’s occurring over the course of many years due to the nature of traditional enterprise IT,” says Michael Warrilow, research vice president at the research group “Cloud shift highlights the appeal of greater flexibility and agility, which is perceived as a benefit of on-demand capacity and pay-as-you-go pricing in cloud.”

More than $1.3 trillion in IT spending will be directly or indirectly affected by the shift to cloud by 2022, according to Gartner (see Table 1). Providers that are able to capture this growth will drive long-term success through the next decade.

Gartner recommends that technology providers use cloud shift as a measure of market opportunity.

They should assess growth rates and addressable market size opportunities in each of the four cloud shift categories: system infrastructure, infrastructure software, application software and business process outsourcing. The largest cloud shift prior to 2018 occurred in application software, particularly driven by customer relationship management (CRM), according to Gartner.

CRM has already reached a tipping point where a higher proportion of spend occurs in cloud than in traditional software. This trend will continue and expand to cover additional application software segments, including office suites, content services and collaboration services, through to the end of 2022. Application software will retain the highest percentage of cloud shift during this period.

By 2022, almost one-half of the addressable revenue will be in system infrastructure and infrastructure software, according to Gartner. System infrastructure will be the market segment that will shift the fastest between now and 2022 as current assets reach renewal status. Moreover, it currently represents the market with the least amount of cloud shift. This is due to prior investments in data center hardware, virtualization and data center operating system software and IT services, which are often considered costly and inflexible.

“The shift to cloud until the end of 2022 represents a critical period for traditional infrastructure providers, as competitors benefit from increasing cloud-driven disruption and spending triggers based on infrastructure asset expiration,” says Warrilow. “As cloud becomes increasingly mainstream, it will influence even greater portions of enterprise IT decisions, particularly in system infrastructure as increasing tension becomes apparent between on- and off-premises solutions.”

North by Northeast: you heard it here first — I was wrong