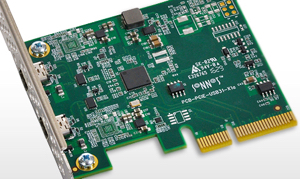 Sonnet Technologies has unveiled the Allegro USB-C PCIe card, a two-port USB-C 3.1 adapter card that enables data transfers from connected devices at speeds up to 960 MB/s.

It provides users with a way to add two USB-C ports to Mac Pro tower and Windows computers with PCIe slots, and to Mac and Windows computers with Thunderbolt ports when the card is installed in a Thunderbolt-to-PCI Express card expansion chassis. This Sonnet adapter card simultaneously supports two bus-powered devices, such as SSDs, hard drives, and external DVD and Blu-ray disc drives.

The Allegro USB-C PCIe card can be installed quickly and easily into any available PCIe slot, without the need to plug in an auxiliary power connector, says Robert Farnsworth, CEO of Sonnet Technologies. With the Allegro USB-C card’s ports, users can connect and use any bus-powered USB 3.1 Gen 2 (10Gbps), USB 3.1 Gen 1 (5Gbps), or USB 3.0 SSDs, SSD RAID, hard drives, and other storage devices with the card delivering up to 15 watts (3.0A) of power per port. Hubs and other USB-IF-compliant devices are also supported.

The Allegro USB-C card incorporates other advanced technologies, such as independent power regulation that isolates each port to prevent cross-coupled power glitches that may cause accidental disconnects; resettable port power fuses; and PCIe data link auto-negotiation, ensuring full 10Gbps performance in either PCIe 3.0 or 2.0 slots. Additionally, the card is optimized for Thunderbolt, offering full performance when installed in any of Sonnet’s Thunderbolt chassis.

The Allegro USB-C PCIe card is now available at a suggested retail price of $59. More information on the card is available at http://tinyurl.com/y7hvyu9g .

The MacJury discusses the many aspects of iPad