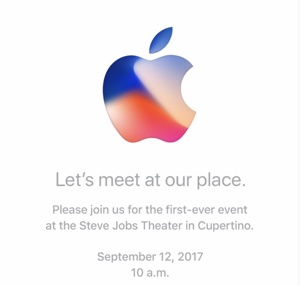 It’s official: Apple will hold a media event on Tuesday, Sept. 12, at 10 a.m. (Pacific). It’s practically a given that new iPhones will be announced. A new Apple TV and the Apple Watch Series 3 are likely to debut, as ell.

The event will be the first held at the Steve Jobs Theater at Apple Park. The press invite says, “Let’s meet at our place.”