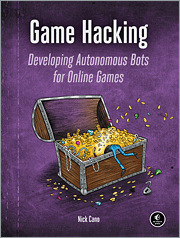 “Game Hacking” (http://tinyurl.com/h69bamx), a new book from No Starch Press, teaches readers to modify online games. It’s goal is to teach readers how to customize games they love while learning the basics of hacking and to help game developers create more secure games.

“Game Hacking” (No Starch Press, $44.95, 304 pages) takes an in-depth look at the inner-workings of PC games and how they can be modified to create bots to automate aspects of gameplay. Readers dig into practice binaries and practical code labs as they hone their skills. This book isn’t just about leveling up and getting “free lives” or “infinite ammo”; it’s a technical book about reverse engineering and how computers work at a fundamental level.

According to author Nick Cano, “A common misconception in the world of online gaming is the idea that the only game you can play is the one in the title, but game hackers find enjoyment playing the game that hides behind the curtain.” He continues, “My book will help game developers understand how they can make their code more secure to defend against attacks and bots.”
“Hackers love to modify and customize things,” says Bill Pollock, No Starch Press founder. “Our goal with the publication of Game Hacking is to make this information readily available, and we’re not one to shy away from the potentially controversial when there’s information to be gleaned.”

Cano wrote his first scripts for open source game servers when he was 12 and has been a part of the game-hacking community ever since. He has years of experience in detecting and defending against malware, and advises developers and designers on best practices to protect their games against bots.

Safari 10 arrives on the scene