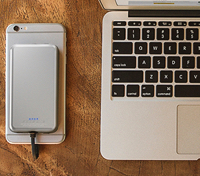 Scosche Industries has announced the MagicMount PowerBank, which magnetically attaches to Lightning or micro USB-powered smartphones to charge them when users are on the go.

It packs an internal 4000mAh rechargeable lithium-ion battery, capable of fully charging a dead smartphone, such as the iPhone 6/6s or Samsung Galaxy S7/S7 Edge, twice. Its built-in 2.1A output charges these devices safely and at the fastest rate possible, according to the folks at Scosche. The MagicMount PowerBank comes pre-charged and can be used right out of the box. It features four blue LED lights that indicate available battery power level.

The MagicMount PowerBank affixes to smartphones via “100% safe, powerful rare-earth magnets,” while the built-in Lightning or micro USB cable plugs into the device for charging. This connection provides a compact design.

The MagicMount PowerBank works with tablets also. It’s available now at SCOSCHE.com for $49.99 (the micro USB device edition) or $59.99 (the Lightning device model).