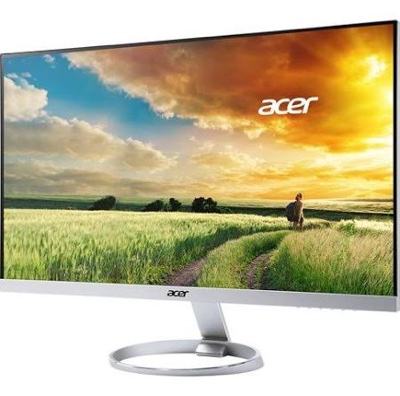 Since Apple’s 12-inch MacBook only comes with an USB-C port, it’s a little tricky to connect a monitor. Or, at least it was. Acer and Lenovo have announced two displays with UBS-C connectivity, which should make them nice MacBook accessories.

Acer says its H7 series monitors (pictured) are the world’s first to support USB Type-C, so users can transfer data and display content from notebooks or smartphones, while charging them at the same time through just one cable. With a ZeroFrame design, diamond-cut and brushed-metal stand, the Acer H7 series models are offered in 25-inch and 27-inch options.

They also boast WQHD (2560 x 1440) display resolution, audio with Acer TrueHarmony and DTS Sound and come outfitted with USB Type-C and HDMI 2.0 ports. Acer says the H7 series supports 100 percent of the sRGB color gamut. The displays will be available in February with prices starting at $499.99.

According to AnandTech (http://tinyurl.com/pfxqjks), Lenovo has announced the 24-inch ThinkVision X24 Pro and the 27-inch ThinkVision X1. The former is a 1920×1080, near-borderless display with an an IPS panel, two 3S speakers, a dual-array microphone, and wireless phone charging base. It’s due in May for $399.