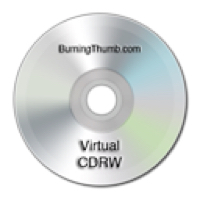 It also fixed a problem where the Show in Finder menu item wasn’t showing the bin/cue disk image files for a mounted image. Version 2.0 also improved responsiveness of the menu bar.

Virtual CD RW Mac is virtual CD drive for Mac that uses a disk image, although it appears to Mac OS X as if a CD has been inserted, making it possible to read from and burn to a virtual CD drive, instead of a real one.