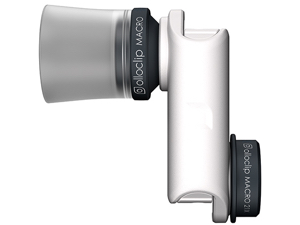 olloclip’s new Macro Pro Lens makes it easy to bring professional and recreational mobile photographers closer than ever to their subjects with superior clarity.

The new Macro Pro Lens gets closer than ever to see all the details in recreational, industrial, scientific, fashion and other photography applications where detailed shots have enormous benefit. It’s a handy tool for capturing extreme levels of definition with the convenience of having everything there and at the ready on your iPhone.

olloclip’s high-powered Macro Pro Lens is engineered with six-element optics to deliver edge-to-edge clarity with a greater depth of field. High magnification focuses in on details and textures not easily seen with the naked eye. The 7x macro lens also has more depth of field making it easier to make macro videos.

Like lenses used on larger professional DSLR cameras, the olloclip lens system is designed specifically for iPhone to provide similar perspectives and is sized small enough to fit in a pocket, purse or hand. olloclip’s design enables the lens system to clip on and off the iPhone in seconds.

Designed in the U.S.A., the Macro Pro Lens works on both the rear-facing and front FaceTime™ cameras and with all photo and video apps including Instagram, Facebook, Snapchat and Periscope. It comes with three wearable pendants to keep the lens easily accessible on a keychain, backpack, handbag or anywhere within arm’s reach.

The olloclip Macro Pro Lens retails for US$69.99. It’s available now at http://www.olloclip.com and major retailers including Apple and Best Buy.