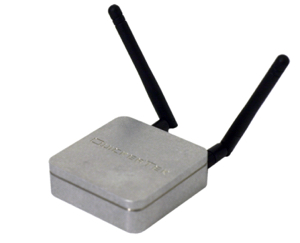 QuickerTek (www.quickertek.com) has created an upgrade for their adapted Apple AC Base Station and Base Station Express with the Dualy Extreme. It’s an antenna system with one watt of RF power that enables the Apple router with additional speed and range.

The increased power seeks out more distant wireless signals and locks onto them with twin 500 milliWatt transceivers coupled with two antennas that create two combined signal paths for up to five times more wireless range. The Dualy Extreme is designed for wireless networks at the office, school, hotels, and coffee shops — essentially anywhere signal strength and speed are hampered by distance and common wireless obstacles, such as walls and floors.

Two 500 milliWatt transceivers internal to the Dualy Extreme reach out to access points and computers capable of 802.11b/g/n/ac wireless networking, manufactured by a wide variety of common hardware vendors. This product is compatible with both QuickerTek modified Apple AC Base Station or Base Station Express as well as many other routers with moveable antennas.

The dual 3dBi antennas, one for each transceiver, provide the speed necessary for 802.11b/g/n/ac WiFi which runs in the higher 2.4GHz wireless range. The Dualy Extreme may be upgraded with even more powerful antennas for even greater distance and speeds. Both antennas are attached via three-foot cables so you can get up and away from common desktop WiFi impediments.