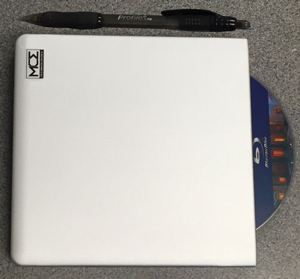 MCE Technologies’ (http://tinyurl.com/khvlneg) Aluminum USB 3 Blu-ray/DVD/CD Recorder is designed for all Macs with, or without, a built-in optical drive. The enclosure material is aluminum, and the interface is USB 3.0.

The Aluminum Fovea Extreme 3 can read and record data and high definition video to 25GB, 50GB, 100GB, and 128GB Blu-ray recordable discs, as well as M-Disc Blu-ray media. Included with the drive is Mac Blu-ray Player software, allowing the playback of commercial Blu-ray titles in high definition directly on the Mac.

In addition to playing and recording Blu-ray media, the drive plays and records all DVD and CD formats as well. The Fovea Extreme 3 measures only 5.6 x 5.9 x 0.75 inches and weighs in at only 11 ounces. It retails for US$99.95 and is available immediately.

The aluminum Fovea Extreme 3 matches the look and feel of Macs made from milled aluminum such as the MacBook Pro, Mac mini, and iMac and allows Macs that ship without a built-in optical drive, or whose optical drive has failed, the ability to read, and record to, every type of optical media in use. It provides full access to all forms of optical media on the Mac for viewing, editing, distributing, and archiving.

The Aluminum Fovea Extreme 3 connects to the Mac’s USB 3.0 port for all data and power needs using the included USB 3.0 cable. It is also backwards compatible with Macs with USB 2.0 ports.

The Aluminum Fovea Extreme 3 can record data and video to high capacity 25GB single-layer and 50GB dual-layer write-once Blu-ray BD-R media at 6X (27MB/sec), to 100GB triple-layer and 128GB quad-layer write-once Blu-ray BD-R XL media at 4X (18MB/sec), and to 25GB, 50GB, and 100GB rewritable BD-RE discs at up to 2X (9MB/sec). The drive is also compatible with M-Disc 25GB Blu-ray discs, designed to be able to last 1000 years, for permanent storage and archival of important photos, videos, and documents.