iOS and Android have inched closer to total domination of the worldwide smartphone market in both the fourth quarter (4Q14) and the calendar year 2014 (CY14).

“Many of the same drivers were in play for Android and iOS to tighten their grip on the market,” says Ramon Llamas, research director with IDC’s Mobile Phone team. “A combination of strong end-user demand, refreshed product portfolios, and the availability of low-cost devices – particularly for Android – drove volumes higher.”
What will bear close observation is how the two operating systems fare in 2015 and beyond, he adds. Meanwhile, Samsung experienced flat growth in 2014, forcing Android to rely more heavily on smaller vendors to drive volumes higher.”

“Instead of a battle for the third ecosystem after Android and iOS, 2014 instead yielded skirmishes, with Windows Phone edging out BlackBerry, Firefox, Sailfish and the rest, but without any of these platforms making the kind of gains needed to challenge the top two,” says Melissa Chau, senior research manager, IDC’s Worldwide Quarterly Mobile Phone Tracker. “This isn’t to say that vendors aren’t making moves, especially for the growth segments – the low-end markets. With Microsoft bringing ever-cheaper Lumia into play and Tizen finally getting launched to India early this year, there is still a hunger to chip away at Android’s dominance.” 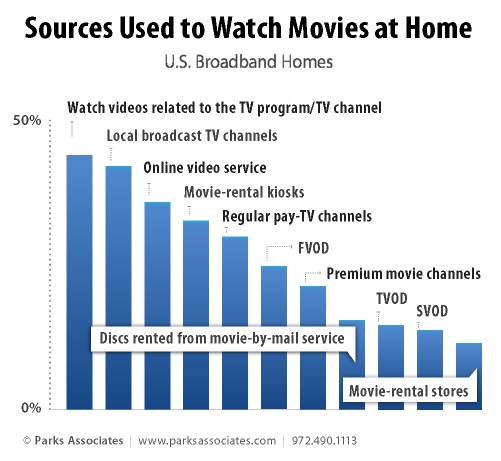 Over 40% of U.S. broadband households subscribe to an online video service