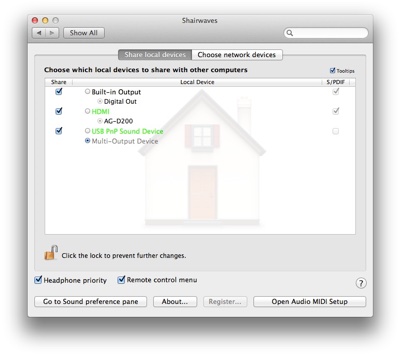 The app replicates all device characteristics — up to eight channels with sample rates up to 192kHz and sample widths up to 32 bits. Encoded audio formats are also shared, making it possible to watch a DVD or iTunes movie on a MacBook and have the 5.1 surround audio come out of a home theatre system with no wires. Devices appear on client computers just as they do on the serving host and can be used in the same way.

Shairwaves can also run on the Raspberry Pi computer and PCs running Linux, with complete plug-and-play installations downloadable to an SD card or USB stick to be booted directly. You can add a Raspberry Pi to a home theatre amplifier, powered from its USB port and connected by HDMI, to get 8-channel output, sample rates up to 192kHz, and encoded audio support — all over the network on your Macs.

Shairwaves devices normally operate on a first-come-first-served basis, being removed from other computers while in exclusive use. Each computer has its own separate settings for a specific device — applied when you start using it. If a device is taken by someone else, the included preference pane lets you see who. Alternatively, a device can be shared with a single format allowing any number of computers to play it at the same time.

Network latencies are user-adjustable from up to four seconds down to 50ms (1/20th second), allowing accurate audio-video synchronization and instant response to clicking through tracks. Device and data source names can be changed to reflect location or function, all this with each user having their own network device configuration. You can flip between users to see the audio device list and settings update to the personalized choices.

Shairwaves devices also work with OS X aggregate and multi-output devices. You can join multiple network devices together to create a wireless surround sound system or to have the same audio all over your house, all synchronized.

A remote control facility allows shared devices to be controlled from the serving hosts so you don’t have to go back to the playback computer to change the volume or iTunes track. Even the Raspberry Pi can remote-control playback with an add-on board (not supplied by Coolatoola.com).

Any number of devices can be shared from any number of computers so long as each device is physically connected. However, Airplay and Bluetooth audio devices can’t be shared.

Changes in device availability are managed automatically. Disconnect a shared USB device, and it disappears from the other computers, wake a sharing host and its devices reappear on the other Macs automatically.

Shairwaves supports Mac OS X 10.5 and higher. Pricing starts at US$15. Go to the Coolatoola web site for details or to download a demo.