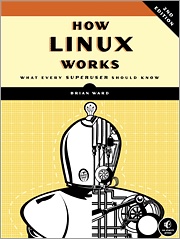 Unlike Mac OS X and Windows, Linux gives users complete control—if they know what to do with all that power. There are countless ways to tweak and customize Linux (and just as many ways to break it!), and author Brian Ward’s goal in “How Linux Works, 2nd Edition” (http://tinyurl.com/plwyz4l) is to show people exactly how Linux works so they can take control, too.

In the completely revised second edition (No Starch Press, Nov 2014, 392 pp., $39.95), readers will learn: how Linux boots; what the kernel actually does; how networking, development tools, and shell scripts work; and more. Readers also explore the kernel in even greater detail, learning about system calls, input and output, and file systems. Ward combines theory with real-world examples to show both how to administer Linux and why each technique works.

The author hass been working with Linux since 1993. He is the author of “The Linux Kernel-HOWTO,” “The Book of VMWare” and “The Linux Problem Solver.”