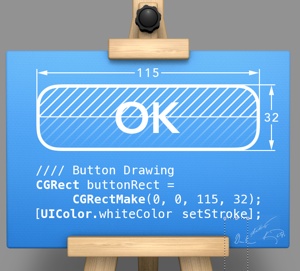 Many developers rely on images to draw the user interfaces of their apps. Since Retina displays were introduced by Apple, developers have had to provide two sets of raster images for two different pixel densities.

With the new Retina HD displays in iPhone 6 Plus, a third set of raster images for the new pixel density will be necessary to ensure the best possible image quality. All these images will increase the size of applications; moreover, managing and creating them is a burden both for developers and for graphic designers.

PixelCut’s PaintCode now provides a solution to this problem by letting developers create apps that don’t use any raster images. With the software, developers can make their apps completely resolution-independent. PaintCode is a vector drawing app that outputs Objective-C or Swift code instead of images. This code is resolution-independent, so it works perfectly on all kinds of displays.

PaintCode requires OS X 10.8 or later. It’s available on the Mac App Store and PixelCut’s own store (http://www.paintcodeapp.com) for $99.99.