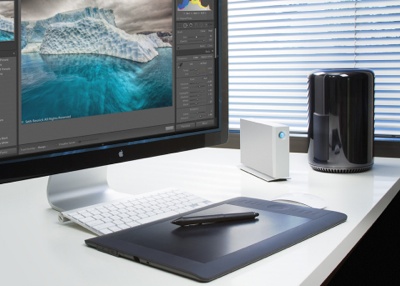 LaCie’s (www.lacie.com) latest d2 features a new all-aluminum unibody enclosure, dual Thunderbolt 2, and USB 3.0. Plus, LaCie designed the d2 Thunderbolt 2 to be upgradable to the fastest SSD on the market, which boosts speeds up to 1150 MB/s. It combines the latest interfaces and a Seagate 6 TB 7200 RPM professional hard disk, resulting in speeds of up to 220 MB/s.

To multiply speeds by a factor of five, users can install the LaCie d2 SSD Upgrade (sold separately). The upgrade increases speeds up to 1150 MB/s and adds 128 GB of PCIe SSD storage. This speed exceeds the performance of even the internal SSD on a late-model Mac or PC.

Simply remove the LaCie d2’s rear panel and install the upgrade^. Two separate drives mount on the computer – one for the SSD and one for the hard disk. Use the SSD for bandwidth-intensive tasks, such as fast file transfers, audio mixing, video editing, or OS booting, and the hard disk for file archiving.

This speed makes it possible to significantly reduce backup and transfer times as well as store and browse a massive RAW Adobe Lightroom library with zero lag.The dual Thunderbolt 2 ports let the user daisy chain up to six devices to a single Thunderbolt port on a computer. Plus, since Thunderbolt 2 and USB 3.0 are backward compatible, the user always gets the best speeds that their computer allows.

The all-aluminum unibody enclosure is forged from a single sheet of aluminum, providing rigidity for long-term durability. The enclosure also draws heat away from the hard disk, allowing fan-free cooling. The integrated base extends the surface area, providing even more space for heat dissipation. A cushioning base and vibration-absorbing hard disk mounts combine to reduce vibration. Plus, an integrated cable lock prevents accidental disconnection of interface or power cables.

Thanks to a bundled professional backup software suite and compatibility with Time Machine and Windows Backup, the LaCie d2 includes everything needed for secure backup. This product also includes LaCie Private-Public software, which prevents unauthorized access by password-protecting volumes with AES 256-bit encryption. 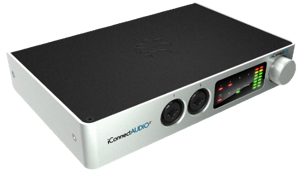