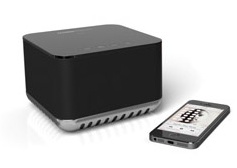 Mass Fidelity has introduced The Core, a compact wireless speaker that combines “better than stereo” sound with an impressive feature set including, portability, multi-room functionality and crystal-clear audio, according to Ben Webster, CEO and founder of Mass Fidelity.

It uses Wave Field Synthesis (WFS), an audio rendering technique that produces a sonic image that sounds like two widely placed hi-fi speakers, he adds. Users can access and play music wherever they want—streaming straight from a smartphone or tablet or via digital and analog sources using a wired connection.

Without having to download apps or configure networking equipment, users can instantly connect up to nine units to create a multi-room music experience with the touch of a button. The Core boasts 120 watts of digital power, six digital signal processors, and an ARM processing core.

The Core will retail for US$599. However, it will launch on Indiegogo (http://tinyurl.com/njmqaw6) for US$349 for one unit, $698 USD for two or $999 for three. The Core is slated to be available in early to mid-December.

Typinator is ready for macOS Sierra