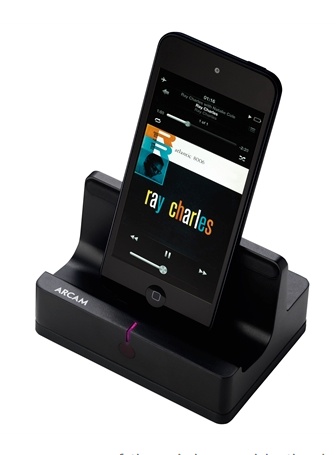 The ARCAM rDock-uni is an US$299.99 dock for audiophile-loving iDevice owners. It sports Apple’s Lightning connector.  With the ARCAM rDock-uni, you can use the high-quality internal DAC on it or you can send a digital signal directly to an audiophile DAC, like the Arcam D33. The rDock-uni will also let you connect your existing 30-pin device to the dock via a rear-mounted USB connector.

There’s a built-in Burr-Brown TI PCM1502 DAC (digital-to-analogue converter), that allows music lovers to listen at a quality level that no other dock offers. If that’s still not good enough for you, there’s a digital output to send the audio signal to an even higher grade external DAC such as Arcam’s £400 irDAC or £2200 FMJ D33.

The aluminum base of the rDock-uni provides a stable base for docked iPhones/iPads/iPods and will charge the portable device while it’s playing. On the back of the unit are stereo analogue RCA outputs, a coaxial digital out and USB socket.
A small remote is included as standard, which controls the docked device.

System integration means the rDock-uni can also be controlled via the remote that comes with Arcam’s Solo neo and Solo mini music systems, as well as most Arcam AV amps and the T32 DAB tuner. Go to http://tinyurl.com/nqgupoz for more info.