Nearly two-thirds of U.S. broadband households have at least one Internet-connected CE device 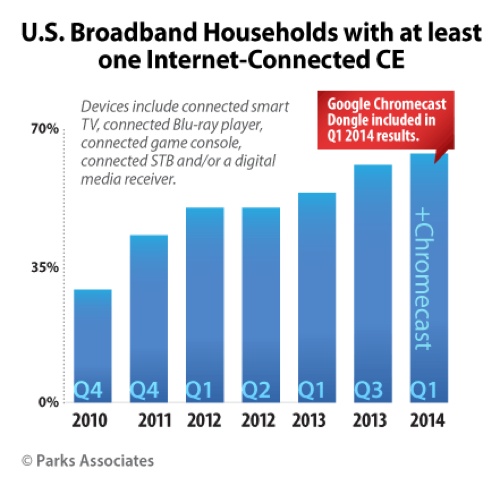 A 1Q 2014 consumer survey by Parks Associates (www.parksassociates.com) finds 64% of U.S. broadband households have at least one consumer electronics device connected to the Internet, which could include a smart TV, Blu-ray player, game console, set-top box, a digital media receiver, or Google Chromecast.

“The percentage of U.S. broadband households with multiple connected CE devices in use continues to increase, with game consoles still leading the way,” says Barbara Kraus, director of Research, Parks Associates. “Nearly 50% of U.S. broadband households connect a game console to the Internet to access online content and applications, while 24% have a connected smart TV.”

The research shows 21% of U.S. broadband households use a Blu-ray player to connect to the Internet, 16% connect via a streaming media player, and 5% use Google’s Chromecast device.

“Every connected device category can connect to the Internet and stream content, but there is no one super device that will push the other devices out of the market, at least not in the next three to five years,” Kraus says. “Most devices have consumer uses other than streaming; the one device that is single purpose-streaming media players-is low cost and effective in extending online content to TVs. As companies seek to take advantage of new monetization opportunities in advertising, content promotion, and other areas, the number of categories of streaming devices, as well as cross-ownership, ensures that there will be heavy competition for the new revenue streams, requiring companies to develop winning business models.”

Analyst: tech supply chain would be in trouble without Apple