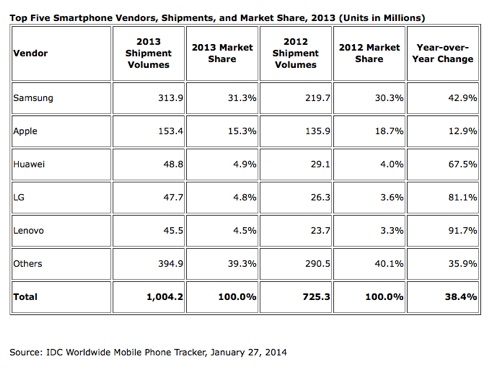 The worldwide smartphone market reached yet another milestone, having shipped one billion units in a single year for the first time, according to the International (IDC) Worldwide Quarterly Mobile Phone Tracker. Vendors shipped a total of 1,004.2 million smartphones worldwide, up 38.4% from the 725.3 million units in 2012.

According to IDC (http://www.idc.com), Samsung ended the quarter the same way it began the year: as the leader in worldwide smartphone shipments. However, even with sustained demand for its Galaxy S III, S4, and Note models, as well as its deep selection of mid-range and entry-level models, the company realized a decline compared to the previous quarter.

Apple posted record shipment volume during 4Q13, driven primarily by the addition of multiple countries offering the iPhone 5S and 5C, and sustained demand from its initial markets that saw these models launch at the end of 3Q13.