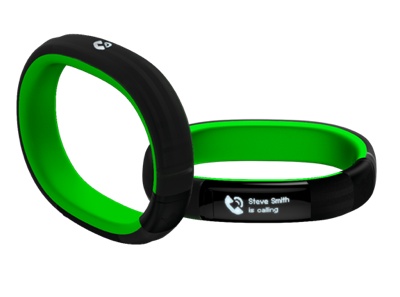 Razer rolled out its Nabu smart band at this week’s Consumer Electronics Show. It interacts with iOS and Android devices.

The Nabu is a wearable devicee that delivers notifications from a smartphone right to one’s wrist and tracks selected personal information. It’s also an open platform that third-party applications can exploit to create novel experiences for users, applying personal, physical and geographical opt-in data.

The Razer Nabu has two OLED notification screens — a Public Icon Screen and a Private Message Screen. The Public icon screen — located on the top of the wrist — notifies users of incoming calls, texts, emails and app updates via notification icons. The Private message screen — located on the inside of the wrist — provides detailed information of texts, emails, bio data and other updates that can only be viewed by the user.

The Razer Nabu has advanced sensors for data tracking, including location information, bio data feedback (steps walked, distance traveled, stairs climbed, etc.), sleep data, band-to-band communication and more, collected on an opt-in basis for users to better understand and adjust their daily activity. An included utility app can customize the type of data collected and can set permissions for the data to be shared.

The collected data as well as pre-configured capabilities and gestures on the Razer Nabu will be available on an open development platform to allow first- and third-party developers to update existing apps or build new ones to create new types of personal and social experiences for Razer Nabu wearers and third-party app users, says Min-Liang Tan, Razer co-founder, CEO and creative director. The Razer Nabu will be available for sale worldwide in later this quarter; the retail price hasn’t been announced. However, developers can sign-up now and get the band at the developer’s price of US$49.