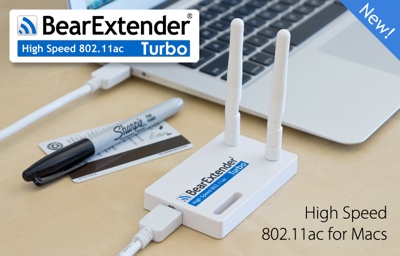 BearExtender’s BearExtender Turbo is a high speed 802.11ac USB Wi-Fi adapter for those who don’t have the latest Macs.

802.11ac is the newest standard in wireless networking and it brings blazing fast Wi-Fi speeds. However, only the newest 2013 MacBook Air, 2013 MacBook Pro and 2013 iMac come equipped with 802.11ac capability today. BearExtender Turbo allows people with other Macs to add 802.11ac technology since earlier internal AirPort cards from Apple can’t be upgraded to 802.11ac.”

BearExtender Turbo plugs into a Mac’s USB 3.0 or USB 2.0 port and is compatible with Mac OS X 10.6 and higher. The drivers were developed specifically for Mac OS X with a simplified interface.

BearExtender Turbo is available at a suggested retail price of US$79.97. For more info go to www.BearExtender.com .