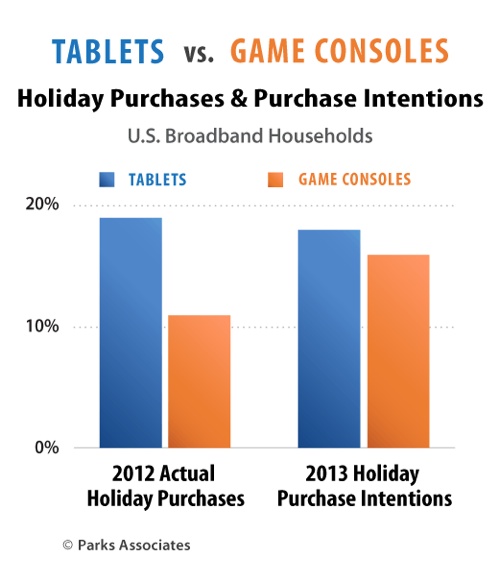 Parks Associates’ research reports purchase interest in game consoles has rebounded after tablets surged ahead in the 2012 holiday season. The research group’s analysts say comparable percentages of U.S. broadband households purchased tablets and game consoles in 2011, and if current intentions reflect 2013 purchases, game consoles will soon be back on an equal footing with tablets.

“Tablets are poised to be a big seller this Black Friday and holiday season, with Apple, Microsoft, and Nokia announcing new models, but the launch of new game consoles from Microsoft and Sony may steal their momentum,” says Harry Wang, director, Health & Mobile Product Research, Parks Associates. “2013 will not be a repeat of 2012 as 18% of broadband households currently plan to purchase a tablet over the holidays vs. 16% for a game console. By comparison, in the 2012 holiday season, 19% purchased a tablet, and 11% purchased a game console.”

Brett Sappington, director, Research, Parks Associates, adds: “The tablets on sale this holiday season will be thinner, some with faster processors, but otherwise comparable to those sold last year. Consoles have had a major upgrade in terms of resolution, processing power, new features, and new titles. Already 14% of all U.S. broadband households use a connected game console to stream video, and the enhancements in the PlayStation 4 and Xbox One will further expand the console use cases.”