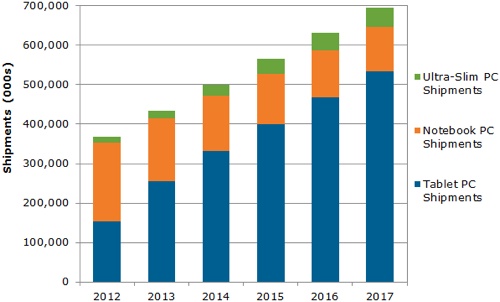 The forecast for global tablet shipments has been lowered as short-term build plans are being reduced, according to the NPD DisplaySearch research group.

NPD DisplaySearch (www.displaysearch.com) says shipments are still expected to be up 30% year-over-year, but projections between 2013 and 2017 are being scaled back by roughly 9% every year. The main factor in the forecast reduction is white-box tablet production in China, which is being pulled back following overly aggressive build plans that out-paced demand.

Despite the current situation in China, much of the future growth for tablet PC shipments will come from the China and Asia Pacific regions. These regions will make up nearly 50% of the worldwide tablet PC segment by 2015, increasing to nearly 60% by 2017. In comparison, North America and EMEA, which combined will make up 50% of the market in 2013, will fall to 36% in 2017, says NPD DisplaySearch.

“Tablet PCs are gaining share at the expense of standard notebooks in key emerging regions where PC penetration rates are low,” says Richard Shim, senior analyst with NPD DisplaySearch. “Parts of China and Asia Pacific, such as Indonesia and Thailand, are the new battlegrounds for PC shipment growth, and low-cost tablets are compelling alternatives to traditional standard notebooks in those regions.”