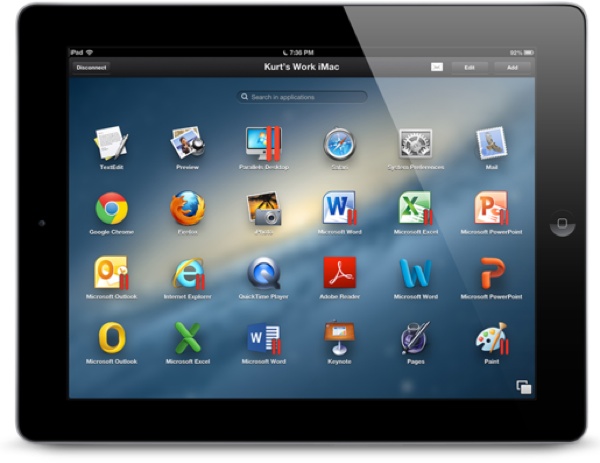 Parallels has introduced Parallels Access for iPad, a product that “applifies” Mac and Windows applications, letting customers remotely access and experience them as if they were made for the iPad.

Now people can enjoy native iPad gestures even in applications not optimized for iPad. With Parallels Access (www.parallels.com/access), just tap right to what you need to get done, in any Windows or Mac application.

With more and more people using iPads on-the-go, Parallels Access empowers them to get more done easily, work or play — even with low-bandwidth connections. Developed by the makers of Parallels Desktop for Mac (www.parallels.com/desktop), Parallels Access is now available for the iPad with full support for Macs, and Windows support is available as a free beta. Support of devices in addition to the iPad is in development.

“We are now in an always-on age where people are increasingly demanding access to their applications and data regardless of physical location,” says Birger Steen, CEO of Parallels. “With Parallels Access, you can tap, swipe and pinch your way around Mac and Windows applications to ultimately be more productive at work, and lead a more connected life.:

A recently released report by analyst firm Enterprise Management Associates(1) that looked at enterprise adoption of PC and mobile devices found that the majority of business users are supplementing their desktop computers with at least one mobile device. With Parallels Access, anyone can increase productivity by enjoying a seamless and integrated experience and accessing computers and desktop applications from anywhere, Steen says. Additionally, customers are able to access not just their professional business applications but also their games and entertainment — including streaming video — from their Mac or PC directly on their iPad.

“With the rapid adoption of iPad devices both by business users and consumers, the market potential for Parallels Access is huge,” says Laura DiDio, principal, Information Technology Intelligence Consulting. “The app is unique in that it customizes and optimizes — or ‘applifies,’ a term Parallels coined — all of your desktop applications by enabling native tap and swipe-type gestures that will be an innovative intuitive experience for iPad users. It’s going to disrupt the market, not the user.”

° App Launcher: Start any desktop application, Windows or Mac, as if it were made for an iPad;

° App Switcher: Switch between desktop applications with ease, literally going from app-to-app in a tap;

° iPad native select and drag: Select words and graphics with one finger, on Mac or Windows applications, then drag, drop and go;

° iPad native copy and paste: Select and copy from your desktop and paste it anywhere — between iPad apps, or even from desktop to desktop;

° SmartTap and magnifying glass: Tap with precision inside your desktop applications, so you never miss a thing;

° Desktop keyboard on iPad: Shows up just when you need it, contains Windows and Command keys too;

° Full screen for desktop applications: Maximize your screen real estate on the iPad, use every inch of your Retina display;

Parallels Access for iPad is initially available for purchase on the Apple App Store as an annual subscription at US$79.99 for each computer being accessed. Each Mac or PC being accessed needs its own subscription. The Mac Agent is available immediately with a 14-day free trial, and the PC Agent is currently in beta and is available at no charge during the beta period.

Parallels Access hardware requirements include an iPad 2, iPad 3 or iPad mini and a Mac running OS X (Mountain Lion 10.8, Lion 10.7 or the upcoming Mavericks 10.9 after it launches) or a PC running Windows 7 or Windows 8. If a Mac user also runs Parallels Desktop 8 for Mac, then Parallels Access will also “applify” all of its Windows virtual machines and apps so they work like they were made for iPad.