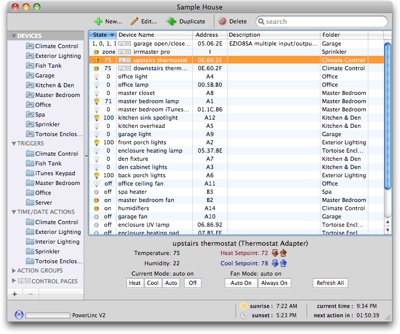 Perceptive Automation’s Indigo 6, a rev of the intelligent home control server for Mac OS X, has gotten even kooler by adding support for a variety of Z-Wave devices.

Indigo now has built-in support for three of the most popular home automation protocols: Z-Wave, INSTEON, and X10. Also new to this version are several usability, UI and server security improvements, as well as new plug-in APIs (application programming interfaces).

Indigo now supports Z-Wave lighting, appliance, thermostat, and sensor devices. Z-Wave devices. This is a boon for those outside of North America who have had to rely on X10 or other older solutions to meet their automation needs. With this new addition, Indigo now has built-in support for three of the most popular home automation protocols: Z-Wave, INSTEON, and X10.

Indigo can integrate devices of any supported protocol together in a technology independent way, and can do so simultaneously. Z-Wave and INSTEON, along with X10 and 3rd party plugin-based devices, coexist harmoniously in a single environment.

Users can pick and choose the devices that solve their automation needs without regard to protocol. For instance, a user can use an IP-based thermostat, Z-Wave, INSTEON, and Philips Hue lights, and INSTEON or X10 keypads, motion sensors, and sprinklers in a single interface.

Other new features include expanded INSTEON support for new and updated INSTEON devices, including the Leak Sensor, Smoke Bridge, and DIN Rail modules. A new Virtual Device interface makes it easier for users to integrate other devices and services and to create cross-technology scenes. New energy monitoring capabilities, for both whole house and for individual lights and appliances, have been added since energy monitoring and reporting has become a key aspect to home automation systems.

Indigo 6 Pro is available now for $199.95 and Indigo 6 Lite for $99.95 (USD), both through the Perceptive Automation website (www.perceptiveautomation.com). Owners of some previous versions of Indigo can get an upgrade discount to Indigo 6. Also available online is a 30-day trial copy of Indigo 6 Pro. Indigo runs on Mac OS X 10.5 or greater.