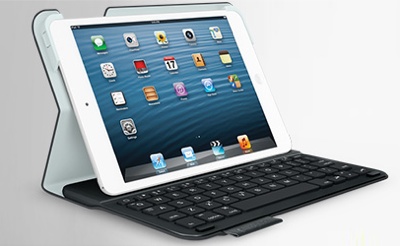 Logitech has introduced two new folios to its lineup of products for the iPad mini: the Logitech Ultrathin Keyboard Folio (pictured) and Logitech Folio Protective Case. The former features — as you might guess from the name — a built-in keyboard for a fast and fluid typing experience.

The Logitech Ultrathin Keyboard Folio for iPad mini includes a Bluetooth keyboard. Its layout maximizes its key size for fast and fluid typing, despite its smaller size, according to Mike Culver, vice president and general manager of mobility at Logitech. Couple that with iOS shortcut keys, such as cut, copy and paste, and you can type on your iPad mini as fast as you would on a full-size keyboard, he adds.

On a full charge, you can purportedly get up to three months of battery life. The Ultrathin Keyboard Folio’s instant on/off wakes your iPad mini when you open the cover and puts it to sleep when you close it.

The Logitech Folio Protective Case for iPad mini is the company’s thinnest protective case. Made from protective, water-repellant materials, the folio covers the front and back of your iPad mini, helping protect it from accidental bumps, scratches and spills. The folio doubles as a stand that holds your Apple tablet in several positions, from nearly flat to fully uprigh.