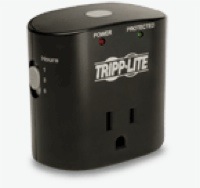 Phantom loads occur when a device connected to an outlet continues to draw power even when it is turned off, a common occurrence when devices such as cell phones, MP3 players and tablets are left plugged in overnight to charge.

The new ECO-SURGE provides surge protection for everything from expensive portable electronics to household items like coffee makers, lamps and fans. It can also help keep homes safer by automatically shutting off power to potentially dangerous devices such as irons, space heaters and curling irons.