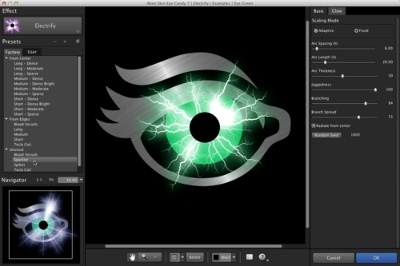 Alien Skin Software has announced an update to its Eye Candy 7 graphic design effects plug-in. The update adds the capability to store presets in a cloud storage folder so that they can be synchronized between multiple computers. It also adds compatibility with the new Adobe Photoshop Creative Cloud.

Cloud preset sharing is available to all users of Eye Candy 7, not just users of Photoshop CC, says Terence Tay, the designer of Eye Candy. It works with multiple cloud storage services, including Dropbox.

Alien Skin’s Eye Candy 7 plug-in renders realistic effects that are difficult or impossible to achieve in Photoshop alone, such as the appearance of Fire, Chrome, and Lightning. Effects like Animal Fur, Smoke, and Reptile Skin are rendered in exquisite detail down to individual hairs, turbulent wisps, and shiny scales, says Tay.

Current owners of Eye Candy 7 can download the update for free. Eye Candy 7 is available through www.alienskin.com for US$199. Owners of any previous version of Eye Candy may upgrade for $99.