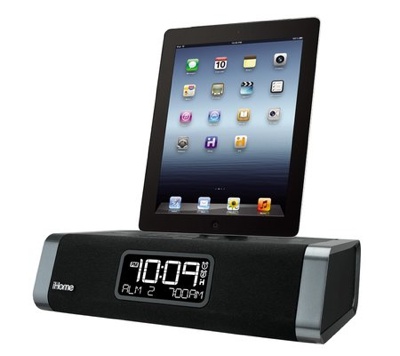 iHome has introduced their new line of Lightning docks that are capable of charging and playing both 8-pin Lightning and 30-pin iPad, iPhone and iPod models.

The iDL45 Dual Charging Stereo FM Clock Radio with Lightning Dock and USB Charge/Play for iPad/iPhone/iPod transforms the iHome dock into an alarm clock speaker system fit for both the Lightning pin connector as well as the legacy 30-pin connector. A special universal USB port charges and plays all Apple devices, while the Lightning dock accepts the iPhone 5, iPad mini, fourth generation iPad, and the new iPods. The US$99.99 iDL45 (pictured) also contains an FM radio.

The iPL10 Dual Charging Stereo FM Clock Radio with Lightning Dock and USB Charge/Play for iPhone/iPod is a compact alternative to the iDL45. It sports an USB port for charging and playing both Lightning and 30-pin powered iPad, iPhone and iPod models. You can wake or sleep to your favorite iPhone or iPod tunes or FM radio stations through high fidelity drivers with EXB expanded bass circuitry. The auto sync feature instantly sets clock to iPhone or iPod time.  The iPL10 is available now for $79.99.

The iDL100 Triple Charging Stereo FM Clock Radio with Two Lightning Docks and USB Charge/Play for iPad/iPhone and iPod, scheduled for release early next month, is a dock for the person or family with multiple devices. Touting two flexible Lightning docks plus a USB port, it charges up to three devices at one time. It can handle two separate alarms with its 7-5-2 feature; while users can wake and sleep to their iPad, iPhone or iPod music. The dock also contains an FM radio with six presets and is equipped with EQ controls for an exceptional audio experience. The iDL100 will retail for $149.99.

For more info go to www.ihomeaudio.com . 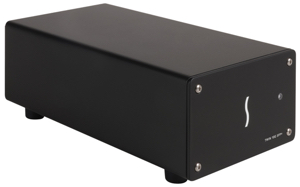