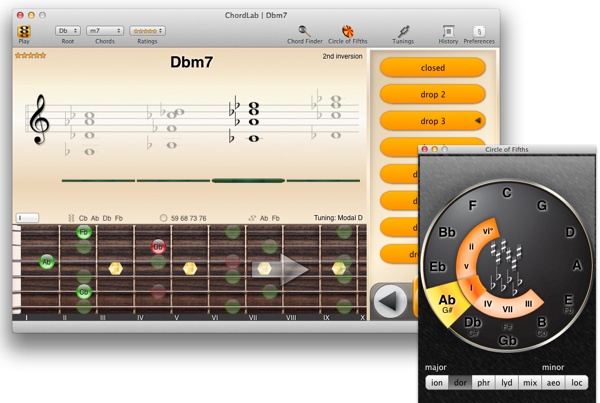 For example, instead of displaying two or three diagrams for that E chord ChordLab puts it into context, lets you play around with it by applying inversions, voicings or adding tensions. The software always displays all inversions of a chord in music notation and is designed to make it easy to to step through all possible voicings. Fingerings are then generated based on root note, type of chord, inversion and voicing.

Another tool found in ChordLab is the Circle of Fifths, which not only allows users to look up key signatures for major and minor scales, but all modes derived of the major scale, like dorian, phrygian. So it’s possible to display key signatures for all mixolydian scales for example and simultaneously highlight the other degrees for that mode. Additionally ChordLab displays degree structures for a key in standard Roman numerals.

ChordLab requires Mac OS 10.6.6 or later. It’s on sale at a 20% introductory discount until March 15, and is available worldwide through the Mac App Store (http://tinyurl.com/bv6xvpj) in the music and education categories. ChordLab normally costs $14.99; educational discounts as well as a limited number of teacher copies are available.