Epic Adventures: Cursed Onboard available at the Mac App Store 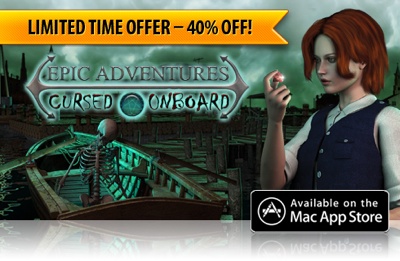 A 3D first person adventure, Epic Adventures: Cursed Onboard has launched on the Mac App Store, courtesy of G5 Entertainment and Urchin Games.

Here’s how the game is described: “A great ship called the Jangada set sail in the 1970s but was never seen again. The fate of the crew remains shrouded in mystery and whoever tries to reveal it, vanishes forever. You receive a letter from a rich media tycoon, Jonathan Brown, who is in search of a brave investigator willing to look into Jangada’s disappearance. Embark on a dangerous trip to the Amazon Jungle to uncover the 40 year-old secret.

“With the help of a child ghost Anna you’ll finally unravel the mystery of the long lost Jangada, stranded in the Amazon Jungle. Take on the quest, undo an old curse and bring peace to a tormented soul”

Epic Adventures: Cursed Onboard is developed and published on Mac OS by G5 Entertainment under license from Urchin Games. Gamers can try the game for free and unlock the full version through an in-app purchase for US$2.99 through March 2; it’s regularly $4.99).