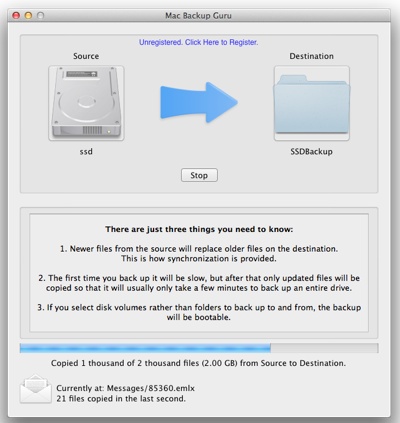 MacDaddy has announced Mac Backup Guru 1.0 for Mac OS X (10.7 and higher), a utility designed to back up files and disks. With a single Start button, the user can sync the contents of any Source with its backup Destination.

Disk backups of startup drives are bootable with Mac Backup Guru. If there’s any inconsistency in the size or modification date between any files, the Source file replaces the outdated Destination file. Following the initial cloning, syncs take minutes instead of hours, according to the folks at MacDaddy.

Syncing ignores the vast majority of files that are identical on the Source and Destination, and it concentrates on only those files that have been updated or added since the last sync. This intelligent backup method is comparable to MPEG video compression, where only the difference between successive frames is recorded (until a new I-frame), according to the folks at MacDaddy.

Mac Backup Guru costs US$39 and is available directly from the publisher’s website (http://macdaddy.io).