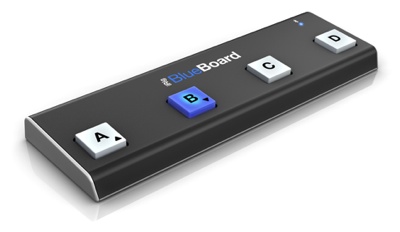 IK Multimedia has announced the iRig BlueBoard, a Bluetooth MIDI pedalboard for iPhone, iPad and Mac. It’s designed to give guitarists, bassists and keyboard players hands-free control of mobile and Mac music apps.

Guitar players, vocalists and keyboard players can use it to extend control of their preferred music apps by switching presets, changing sounds or modifying effects parameters — all hands-free. Any music app or software that is MIDI compatible (the standard communication protocol for musical instruments) — such as IK’s AmpliTube, VocaLive, SampleTank, iGrand — or any other Core-MIDI-compatible app like Apple GarageBand, can be operated wirelessly with iRig BlueBoard.

The unit uses Bluetooth 4.0 technology to transmit the actions of its four onboard, backlit footswitches and its two optional external pedals to the mobile device or Mac. Then using the included iRig BlueBoard app and software, the Bluetooth signals are converted into MIDI messages and routed internally to the music app that’s running on the device.

The iRig BlueBoard is priced at US$99.99 and will be available in the second quarter of the year. For more info go to www.irigblueboard.com .