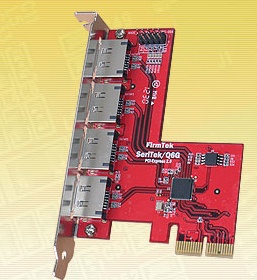 FirmTek is shipping its SeriTek/Q6G 4-Port eSATA host adapter. It’s Mac OS X bootable, whether installed inside the Mac Pro or a Thunderbolt PCIe expansion chassis, with and without SATA port-multiplication.

While the miniSwap/ES and the SeriTek/5PM can be used separately with the SeriTek/Q6G, one setup professional users deploy is the combination of SSD storage along with five bays of 3.5-inch SATA data storage provided by the SeriTek/5PM.

The four eSATA ports available on the SeriTek/Q6G allow both the miniSwap/ES and the SeriTek/5PM to be used concurrently. This combination offers the customer maximum transfer rates for data intensive operations while still supporting up to five removable 3.5-inch SATA drives for expanded storage capacity.

The SeriTek/Q6G supports Mac OS X 10.6 and higher. It’s available at a retail price of US$199.95. For more information go to www.firmtek.com/seritek/seritek-q6g/ .