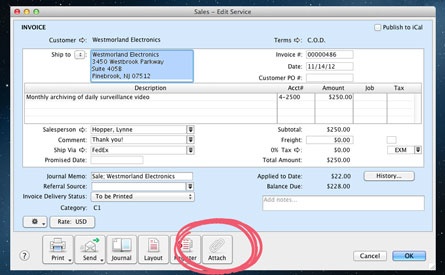 Acclivity has announced AccountEdge Pro 2013 for Mac and Windows. The latest version of their small business accounting software is available immediately and features a long list of enhancements and improvements.

The new document management feature lets the user attach files to records, including documents, images, and scans. Bills, invoices, purchases, or any type of file can be attached to transactions, and AccountEdge files it away for later viewing.

AccountEdge’s retainers feature gets an update, with the ability to link bank accounts, which allows the user to write checks directly from their retainer, escrow, and trust accounts, as well as easily transfer funds into and out of these accounts.

Importing and reconciling bank statements is more streamlined and intuitive with the new Bank Statement Import. The new “worksheet” acts as a middle-man between import and reconciliation to improve the workflow of dealing with bank statements. Plus, rules can be created to look for and match transactions.

AccountEdge Pro is available through the AccountEdge website (www.accountedge.com) and other online outlets, mail order catalogs, and select retailers. It costs US$299 for new users, and $159 for upgraders ($249 for Windows multi-user and Mac Network Edition upgrades).