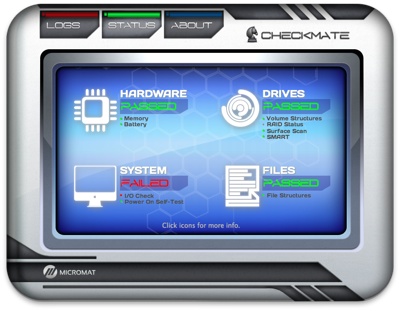 Micromat (www.micromat.com) has released Checkmate, a new automated diagnostic software product for the Mac. It requires Mac OS X 10.6 or higher and costs US$29.99 for a limited time; it’s normally $49.99. Site licenses are also available.

Checkmate “learns” when a Mac is typically idle and only runs tests during those times, stopping any time a user returns to the keyboard. It can identify hard drive, memory and file problems before symptoms become visible to users, so that corrective measures can be taken to prevent data loss or hard drive failure, according to Micromat President Jeff Baudin.

Checkmate is designed to be unobtrusive. After it’s installed, no further action is necessary from the user for the software to monitor the ongoing health of a Mac. All tests are conducted when the user is away from the computer and longer tests can pick up where they left off (incremental diagnostics), allowing for extended tests to be performed over time.

When problems are found, the program alerts the user. At that point, the user can open the Checkmate application that will give more details about the specific problem as well as suggest possible corrective measures.

Checkmate will not make any changes or take corrective action. It only reports problems it finds that need attention, and makes suggestions for how the user can correct the problem. Users can then take the necessary steps to prevent problems from becoming more serious in the future, says Baudin.