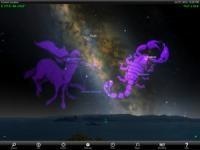 You may have missed the recent Australian eclipse, but you can still get good pricing on Southern Stars’ recent updates to their SkySafari apps for iOS, Mac OS X, and Android.
SkySafari 3.5 is the only iOS astronomy app that correctly displays both solar and lunar eclipses from any place on Earth, according to Southern Stars founder Tim DeBenedictis. Now, the Plus and Pro versions of SkySafari 3.5 add a new twist, he adds.

“You can now leave the surface of planet Earth, and view eclipses and other celestial events from any place in the solar system,” Tim DeBenedictis says.
With this new ability to fly into orbit around other objects in the Solar System, SkySafari Plus and Pro give you a unique perspective on events like this Sunday’s solar eclipse, he adds. By watching an eclipse from the Moon, for instance, you can visually see where the Moon’s shadow will pass across the Earth, and make your travel plans accordingly.

SkySafari’s new orbit feature isn’t just limited to solar eclipses — and it isn’t just limited to iOS. The new 1.5 versions of SkySafari for Mac OS X and Android bring the same new features to those platforms. In addition to orbiting the planets, the new Plus and Pro updates also bring high-resolution maps of the moons and planets – with every named crater, mountain, canyon, and spacecraft landing site labelled. The new Moon map in SkySafari Pro 3.5/1.5 is based on 2009 imagery from NASA’s Lunar Reconnaissance Orbiter, and has 8x the resolution of any previous SkySafari version.

For more info go to http://www.southernstars.com/index.html .