Apple patent is for power cable with a security feature 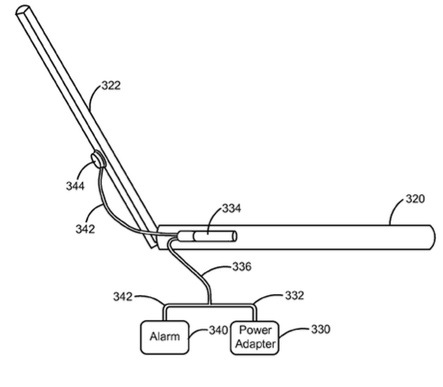 An Apple patent (number 20120279780) for a power cable having a security feature feature has appeared at the U.S. Patent & Trademark Office.

The invention is for an pparatus that may help identify unauthorized removal of goods while maintaining a pleasing physical appearance, avoiding theft misidentifications, and allowing a high degree of customer interaction. One example may provide a signal path for conveying a signal that is active when a good or device is removed from a retail or other environment in an authorized manner. The signal path may be wired or wireless.

In another example, a signal path for a sensor may be inconspicuously combined with a power cable. In another example, theft misidentifications may be prevented by not relying on connections that a customer is likely to interact with to detect a theft. Another example may provide a security device that may allow a high degree of customer interaction by unobtrusively attaching a sensor to the back of a good to be protected.

Here’s Apple’s background on the invention: “Despite the growing popularity of web-based commerce, in-person retail experiences remain an important part of many people’s decisions when purchasing electronic products. This is particularly true for products that provide a high-quality user experience. These products that have a sophisticated look and feel are best shown in person, where customers can interact with them, as opposed to simple on-line images.

“Unfortunately, there is a downside in allowing customers such unfettered access to these high-quality products. On occasion, the products may be stolen. For this reason, it is desirable to be able to detect when a device is being removed from a retail environment in an unauthorized manner. Once an attempt at such an unauthorized removal is detected, steps can be initiated to stop the removal, to prevent other such removals, or to attempt to recover the removed devices at that or a later time.

“But it is also desirable to avoid “false alarms.” That is, it may be desirable to avoid misidentifying mere customer activity and exploration as attempted theft. For example, it may be undesirable for an alarm to sound when a customer merely types on a keyboard or plays with a power connector. Such misidentification can embarrass customers, cause confusion, and create an unprofessional appearing environment, which may lead to customer dissatisfaction, reduced reputation, and a corresponding drop in sales.

“It may also be desirable to avoid product-loss counter measures that visually clutter or complicate a user’s experience. For example, bolting a laptop, or tethering it using a thick cable, may prevent removal of the laptop, but may also inhibit a user from interacting with the device and provide an unpleasing appearance.

“Thus, what is needed are apparatus that help identify unauthorized removal of goods while maintaining a pleasing physical appearance, avoiding misidentifications, and allowing a high degree of customer interaction.”