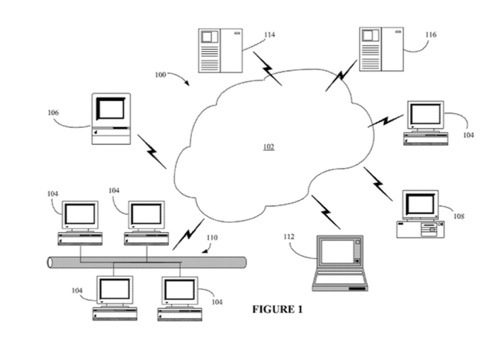 An Apple patent (number 20120272163) for application-specific group listing has appeared at the U.S. Patent & Trademark Office. It involves an user interface for sharing content from a particular application with another person while you’re instant messaging with them.

Here’s Apple’s background and summary of the invention: “Networks, such as the Internet, intranets, or other private or public networks, are ubiquitous. In fact, many computers are connected to one or more networks at the same time. For example, a business may have hundreds or even thousands of computers coupled to its own private network, which was, at least initially, used primarily for storage and exchange of computer files. At least some of these same business computers may also be coupled to the Internet.

“Further, with the development of wireless devices, ad hoc networks may also be formed with properly configured portable devices. Even telephonic devices, such as cellular phones, pagers and the like, may be coupled to one or more of these networks. Small businesses and homes are also often connected in similar arrangements.

“All of this connectivity has naturally led to communications between various users over these networks. For example, electronic mail (e-mail), because of its usefulness, is now commonplace. E-mail is now widely used by businesses and individuals, and in at least some instances has replaced more traditional forms of communications, such as mailed letters, facsimiles, telexes, and the like. However, e-mail has proven to be somewhat awkward when used to carry on an ongoing interaction.

“Instant messaging, on the other hand, allows two or more users connected through these networks to carry on an interactive conversation. Exemplary instant messaging systems include Apple iChat, AOL Instant Messenger, Microsoft MSN Messenger, Yahoo and the like. Typically, two or more users type in messages or select icons, which they send to one another. The receiving party(ies) may immediately respond with an appropriate message or icon. These instant messages are commonly displayed on a participant’s monitor in serial fashion, usually scrolling the user’s screen from top to bottom.

“Each user typically maintains a listing of other people or parties with whom they routinely communicate. Various instant messaging systems use different terminology to identify these other parties, but commonly they are referred to as users, contacts, buddies, or the like. The buddies list allows the user to initiate a conversation with a person on the list by simply selecting them from the list.

“Additionally, the user can readily determine which of his/her buddies are available by checking a status flag. For example, the listing can be configured to display the status of each buddy. Thus, when a buddy is on-line or available to receive an instant message his/her status is indicated as being on-line or available.

“Among the problems associated with the state of the art includes the fact that there is a lack of ability among various users to interact efficiently in the context of an application. Generally, in order to share active contents of a particular application, the user generally has to terminate the activation of an application and separately send various contents to another user who may be on the buddy list of the first user.

“E-mailing various portions of an application for sharing with another user would be difficult to implement in real-time. Generally, a user may have to close a particular application, extract a file, and e-mail that file to a second user, wherein the second user will have to open that particular file after leaving an active application to do so. Meanwhile, the real-time interaction would be lost in such a situation. Additionally, various applications are developed such that e-mailing various files associated with these applications may be difficult.

“One such example would be multimedia files because, generally, multimedia files tend to be large size files. E-mailing such large files may be problematic among various users. The present invention is directed to overcoming or at least reducing one or more of the problems set forth above.”

Michael Stochosky is the inventor.

SuperDrive for laptops due later this year