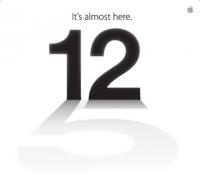 Yesterday’s Apple media event held no major surprises. The iPhone 5, a new iTunes, a new iPod touch and a new iPod nano were revealed — as everyone expected. There was no iPad mini, 13-inch Retina display MacBook Pro or updated iMac announcements. But they’re coming.

With that in mind, here are some random thoughts that occurred to me during the media event:

° No “one more thing.” Apple CEO Tim Cook didn’t try to emulate Steve Jobs’ famous routine of saving the biggest news of all for the end of the event, a la a “one more thing” announcement. In fact, Cook and the gang did the opposite. They started with the biggest news (the iPhone 5) and saved the least earth-shaking news (new iPods) for last. That’s less dramatic, but Cook is smart enough not to copy Jobs’ act.

° Now that the iPod nano has changed sizes (again), what are we going to do about an “Apple watch”?

° They keep predicting its demise, but the iPod classic is still listed at the Apple online store.