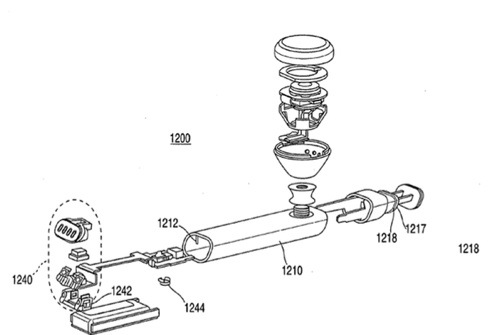 An Apple patent (number 20120224710) for a wireless headset device that includes an earbud assembly and a primary housing assembly, fixed to the earbud assembly, has appeared at the U.S. Patent & Trademark Office.

Here’s Apple’s summary of the invention: “The present invention relates to headsets and methods for manufacturing the same. Headsets are communication devices that are worn on a user’s head in order to allow hands free data and/or voice communication with a host device such as a computer, phone handset, cellular phone, an automobile and/or the like. Headsets can include one or more speakers (in proximity to one or both ears) for audio output and/or one or more microphones for audio input.

“The headset may include a fixed or movable boom that places the microphone closer to the user’s mouth (wraps around the face). Alternatively, the headset may be boomless such that the microphone is integrated with the earpiece thereby forming a more compact device (e.g., smaller, lighter, more aesthetically pleasing, etc.).

“According to one aspect of the invention, the headset can be embodied as a small compact unit including a primary housing and an earbud member extending therefrom. The earbud member may be attached to or integrally formed with the primary housing. Various components can be placed at the surface of or within the confines of the earbud member and the primary housing. In fact, both of them can include one or more components depending on the needs of the device. The components contained within each of these can be widely varied. Examples of operational components can include speakers, microphones, antennas, connectors, buttons, displays, indicators, battery, and associated processors, controllers and circuitry.

“Generally, the earbud member includes at least a speaker while the primary housing includes at least a microphone (although this is not a requirement). Depending on their size, each of these members can include additional components of the headset. In one embodiment, the primary housing includes an antenna, user interface button, indicator or display (e.g., LEDs), battery, microphone, and/or a connector along with any accompanying circuitry while a speaker, a processor, and its accompanying circuitry can be located in the earbud. The button can be located on one end of the main housing. A user can interface with this button to perform various functions (e.g., terminating calls).

“The primary housing can include a tube that forms a housing and receives internal components through an open end. The tube can be manufactured using one of several processes in order to reduce costs and increase speed and efficiency. In one embodiment, the tube can be manufactured to include features on the inner surface of the tube for supporting electronic components of the headset. Processes for creating such a tube can include applying a die and stamp to an extruded tube, single or double impact extrusion, or a progressive deep draw process.

“Small compact headsets have limited surface area for placing components. Therefore, one aspect of the invention relates to integrating multiple components into the same surface area of the headset in order to help form a small compact headset. Put another way, multiple components can be built into the same location on the headset in order to achieve the desired level of functionality without impacting a desired small size of the headset. The components may for example be selected from connectors, microphones, speakers, buttons, indicators, displays and/or the like.

“Small compact headsets also have limited internal volume for placing internal components. Therefore one aspect of the invention relates to dividing/separating internal electronic assemblies into small multiple components that can be positioned at different locations (discretely) within the headset. By way of example, the electronics that would normally be embodied on a single large circuit board may be divided/separated out and placed on multiple smaller circuit boards, each of which can be positioned at different locations within the headset.

“The smaller circuit boards can be more easily placed within various small internal pockets found in a small compact device. Flexible wires and possibly wireless protocols can be used to operatively couple the electronics and/or discrete circuit boards together. In other words, a first portion of the electronics may be separated from a second portion of the electronics, and further the first portion may be positioned at a first location within the headset while the second portion may be positioned at a second location within the headset. Note that, two portions is not a limitation and the electronics can be divided into any number of smaller discrete portions.

“Along a similar vein, another aspect of the invention relates to electronic assemblies that are partially flexible or bendable such that the assemblies can be folded into a small compact form in order to fit inside tightly spaced internal volumes. By way of example, the electronics that would normally be embodied on a single rigid circuit board may be placed on multiple rigid circuit boards that are interconnected by flexible or bendable circuit board portions that can be bent around various internal shapes and/or folded over itself while still functioning properly.

“Another aspect of the invention relates to acoustical paths, ports and volumes that are built through a small compact headset in order to improve acoustical performance of the microphone and/or speaker (with limited impact on the form factor of the headset). In one embodiment, in order to control the flow of air through an earbud, acoustic ports can be integrated into one or more electronic components disposed therein and/or the earbud housing.

“In another embodiment, at least some of the ports that pass through the various housings are substantially hidden from view thereby enhancing the aesthetic appearance of the headset. For example, the ports may be positioned within a seam between two interfacing external surfaces of the headset. In one example, a first external surface is provided by the open end of a tube of the primary housing and the second external surface is provided by an end member disposed within the open end of the tube of the primary housing. The end member may for example include a connector assembly thereby integrating a connector with a microphone into the same surface area.

“In one embodiment, switching circuitry can be included in order to accommodate this symmetry. Such circuitry can, for example, measure the polarity of data and/or power lines from the complementary connector to determine its interface orientation and route the data and/or power lines based on the determined orientation. In some embodiments, the connector assembly can be at least partially made of a ferromagnetic material, which can serve as an attraction plate for one or more magnets on a complementary connector in another device (e.g., a headset charger).

“In accordance with another aspect of the invention, the headset can include an indicator that is hidden from view when inactive and that is in view when active. This can for example be accomplished with micrometer sized holes, called microperforations, that can be drilled into the wall of primary housing and/or earbud member. Through these holes, light sources on the inside of the primary housing and/or earbud member can create visual indicators for a user. A light diffuser can be used in combination with such microperforations so that the indicator can be illuminated with evenly distributed light.

Study: iOS has ‘dramatic lead’ over Android in the enterprise arena