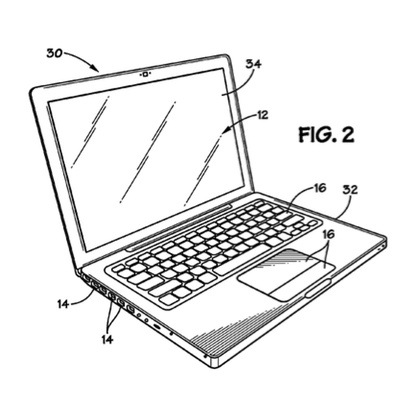 Apple has been granted a patent (number 8248554) by the U.S. Patent & Trademark Office for an edge-lit backlight unit with a thin profile.

In one embodiment, the light guide may be configured such that peak light distribution therefrom occurs at an incident angle of approximately sixty degrees, with broad light distribution substantially occurring over an angular range between incident angles of thirty-five and eighty-five degrees. Additionally, in one embodiment, the turning film may include multiple prisms that receive and redirect the light emitted from the light guide, and that include apex angles of less than or about 60 degrees. Additional edge-lit backlight units and methods are also disclosed.

Here’s Apple’s background and summary of the invention: “Liquid crystal displays (LCDs) are commonly used as screens or displays for a wide variety of electronic devices, including such consumer electronics as televisions, computers, and handheld devices (e.g., cellular telephones, audio and video players, gaming systems, and so forth). Such LCD devices typically provide a flat display in a relatively thin package that is suitable for use in a variety of electronic goods. In addition, such LCD devices typically use less power than comparable display technologies, making them suitable for use in battery-powered devices or in other contexts where it is desirable to minimize power usage.

“LCDs typically include an LCD panel having, among other things, a liquid crystal layer and various circuitry for controlling orientation of liquid crystals within the layer to modulate an amount of light passing through the LCD panel. Further, while certain LCDs may operate by reflecting and modulating passage of light from a source positioned in front of the LCD panel (e.g., ambient light), many LCDs include a light source, such as an internal light source, that illuminates the LCD panel from behind.

‘The present disclosure generally relates to an edge-lit backlight unit for a display. In one embodiment, the edge-lit backlight unit includes a light guide that receives light from a light source, and emits this light in a broad distribution to a turning film. In one embodiment, the light guide includes anisotropic optical elements that refract light such that the light emitted to the turning film falls within a broad distribution, such as over a range of approximately fifty degrees.

‘Various refinements of the features noted above may exist in relation to various aspects of the present invention. Further features may also be incorporated in these various aspects as well. These refinements and additional features may exist individually or in any combination. For instance, various features discussed below in relation to one or more of the illustrated embodiments may be incorporated into any of the above-described aspects of the present invention alone or in any combination. Again, the brief summary presented above is intended only to familiarize the reader with certain aspects and contexts of embodiments of the present invention without limitation to the claimed subject matter.”