Analyst: we may see an ‘iTV” by Christmas 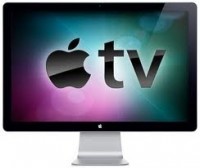 In a note to clients — as reported by “Forbes” (http://macte.ch/cT6hF) — Topeka Capital Markets analyst Brian White says contract manufacturer Hon Hai expects to start receiving LCD TV panels from Sharp in the third quarter rather than the fourth quarter and thinks this may hint at an Apple HDTV (the rumored “iTV”) by Christmas.

Hon Hai had invested in Sharp earlier this year to secure LCD panels that he thinks is meant for the Apple television. The analyst also thinks that Apple plans to use “ a special type of motion detection technology on the future full blown Apple TV,” rather than touch technology.”

“Contacts indicate a unique remote control with a touch panel form factor that looks similar to the iPad would be used to control the device,” White says. “The bezel is expected to be a plastic composition, rather than the aluminum unibody exterior that surrounds the MacBook Air.”