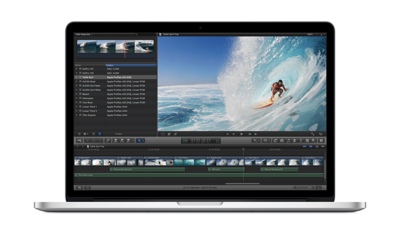 The gang at iFixIt have torn apart the “regular” (as opposed to the Retina display version) of the MacBook Pro that was updated last week. Here’s their report:

“While its sibling with the Retina display may have stolen all the press, today’s MacBook Pro is nothing to scoff at. It’s way more repairable, upgradeable, and hackable than its sleeker, 0.24”-thinner, one pound-lighter sibling. This isn’t much of a surprise to anyone, and neither is the very respectable 7/10 repairability score (compared to 1/10 for the MacBook Pro with Retina Display). Internally the machine is pretty much the same as the last year’s model.

“Yet one question still bugs us: could Apple make a super-sleek laptop like the MacBook Pro with Retina Display and still preserve the repairability of the machine? The answer — and we hope you agree — is yes.

“Comparison highlights between the two machines below. The regular MacBook Pro is always cited first, compared to the MacBook Pro with Retina Display:

“Use of regular vs. proprietary screws. This is a no-brainer in our books — there’s absolutely no benefit from using a proprietary pentalobe screw type in any electronic device, aside from keeping users out of it.

“The battery is exactly the same capacity as last year’s model: 77.5 Wh at 10.95 V. It’s the same size as well, a solid 13.8 mm in thickness. The MacBook Pro with Retina Display’s battery varies in thickness from 5.25 mm to 8.60 mm depending on which cell you measure, and it has a plastic frame around some of the cells.

“Although the discrepancy is large between the two battery thicknesses, the Retina MacBook Pro’s battery (seen here http://bit.ly/retina_battery) is spread out over a much larger surface area. It would’ve taken some engineering, but Apple could expand the frame in the Retina MacBook Pro to encompass the whole battery, and allow it to come out as a singular, non-glued unit.

“Here’s a big difference: the regular MacBook Pro 2.5” SATA hard drive is 9.45 mm thick, compared to 3.16 mm for the SSD found in the Retina Display MacBook Pro. But the SSD is one of the few things that is actually removable from the Retina version, and Apple *could* use a non-proprietary mSATA connector so folks could replace the drive with an off-the-shelf unit.

“While the individual RAM modules are thin (~3.15 mm), the ‘stacked’ RAM slots in the regular MacBook Pro are a whopping 9.15 mm thick. Yet the entire Retina MacBook Pro is only 18 mm thick, and allocating half of that dimension to RAM slots would be a big sacrifice. But, an individual RAM slot is only 4.27 mm thick; if the design of the logic board featured the RAM slots side by side (like older MacBooks), folks could still replace their RAM for years to come.

“While the regular MacBook Pro display may not be Retinalicious, a cracked LCD will still be the most expensive repair (aside from the logic board) on this machine. Thankfully, users can replace just the LCD instead of the entire assembly. Incorporating a removable LCD into the MacBook Pro with Retina display would increase the thickness by less than a millimeter, while still preserving the awesome Retina resolution.

“We love the optical drive in the regular MacBook Pro because we appreciate the additional space given by adding a second hard drive (using one of our SATA enclosures: http://bit.ly/sata_enclosure). A significant portion of the weight savings in the Retina MacBook Pro comes from Apple’s removal of the optical drive. While the lack of an optical drive won’t be major imposition for many, the inability to inexpensively add a secondary, high capacity spinning drive is definitely a significant loss in terms of upgradability.”

In case you’ve missed the original MacBook Pro with Retina Display teardown, you can find it here: http://www.ifixit.com/Teardown/MacBook-Pro-with-Retina-Display-Teardown/9462/1 .